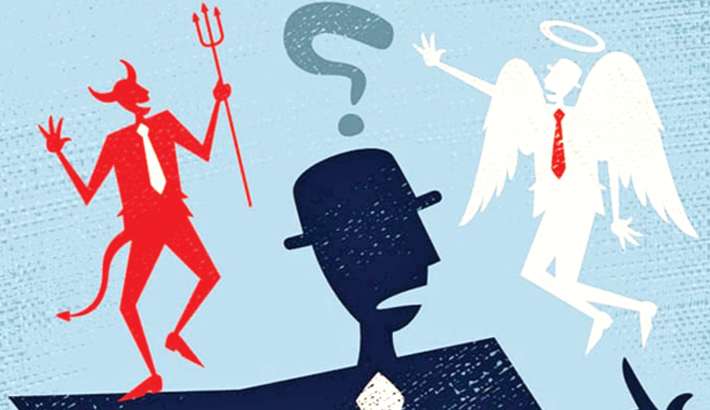 Morality refers to the set of standards that enable people to live cooperatively in groups. It is what societies determine to be “right” and “acceptable”. Sometimes, acting morally means individuals must sacrifice their own short-term interests to benefit society. Individuals who go against these standards may be considered immoral. Morality is not fixed. What is considered acceptable in your culture might not be acceptable in another culture. Geographical regions, religion, family, and life experiences influence morals. Scholars do not agree on exactly how morals are developed. However, there are several theories that have gained attention over the years.

Freud’s morality and the superego: Sigmund Freud suggested moral development occurred as a person’s ability to set aside their selfish needs were replaced by the values of important socializing agents (such as a person’s parents).

Piaget’s theory of moral development: Jean Piaget focused on the social-cognitive and social-emotional perspective of development. Piaget theorised that moral development unfolds over time, in certain stages as children learn to adopt certain moral behaviours for their own sake; rather than just abide by moral codes because they do not want to get into trouble.

B.F. Skinner’s behavioural theory: B.F. Skinner focused on the power of external forces that shaped an individual’s development. For example, a child who receives praise for being kind may treat someone with kindness again out of a desire to receive more positive attention in the future.

Most morals are not fixed. They usually shift and change over time. Ideas about whether certain behaviours are moral such as engaging in pre-marital sex, entering into same-sex relationships, and using cannabis have shifted over time. While the bulk of the population once viewed these behaviours as wrong, the vast majority of the population now finds these activities to be acceptable. In some regions, cultures, and religions, using contraception is considered immoral. In other parts of the world, some people consider contraception the moral thing to do, as it reduces unplanned pregnancy, manages the population, and reduces the risk of STDs.

Some morals, however, seem to transcend across the globe and across time. Researchers have discovered that these seven morals seem somewhat universal: Be brave, be fair, defer to authority, help your group, love your family, return favours and respect others’ property.

Some scholars do not distinguish between morals and ethics. Both have to do with “right and wrong”. But some people believe morality is personal, while ethics refer to the standards of a community. For example, your community may not view premarital sex as a problem. But on a personal level, you might consider it immoral. By this definition, your morality would contradict the ethics of your community.

Both laws and morals are meant to regulate behaviour in a community to allow people to live in harmony. Both have firm foundations in the concept that everyone should have autonomy and show respect to one another. Legal thinkers interpret the relationship between laws and morality differently. Some argue that laws and morality are independent. This means that laws cannot be disregarded simply because they are morally indefensible.

Others believe law and morality are interdependent. These thinkers believe that laws that claim to regulate behavioural expectations must be in harmony with moral norms. Therefore, all laws must secure the welfare of the individual and be in place for the good of the community. Something like adultery may be considered immoral by some, but it is legal in most states. Additionally, it is illegal to drive slightly over the speed limit, but it is not necessarily considered immoral to do so.

There may be times when some people argue that breaking the law is the “moral” thing to do. Stealing food to feed a starving person, for example, might be illegal, but it also might be considered the “right thing” to do if it is the only way to prevent someone from suffering or dying.

It can be helpful to spend some time thinking about the morals that guide our decisions about things like friendship, money, education, and family. Understanding what is really important to us can help us understand ourselves better and it may make decision making easier.

Moral values are the positive teachings and ethical values that define humankind. Buddha made use of the essence of these values in his teachings. These are ethical values that every parent wants their children to imbibe. It helps tread the right path and a responsible person be capable of differentiating between right and wrong. Moral values empower an individual to perform better with human intentions, motives, acts, and relationships with other individuals. Moral values form the basis of all religious practices.

Society disseminates values, religion, culture, politics, and economy in an individual. People tend to pick up certain things from societal opinions and the dynamics of life from society. The community disseminates moral values. Moral values are habits and values that provide great importance in a person’s life.

Moral values hold great significance in an individual’s life. The establishment and sustainability of good relationships in society are dependents on moral values. Lack of these values causes misunderstandings and misconceptions among people.

Moral values hold the same significance across cultures and centuries. However, moral values are centre-specific to a particular age or society. With time, specific moral values change. For instance, the ancient times considered women who did not voice their opinions and stayed home as those with ethical-moral values; however, today, practices have evolved.

Society and culture determine moral values. Moral values remain without any change; however, in time, people leave behind their ethics and values. The modern-day generation sees no time in building their character through moral values. It is often forgotten that these values reflect a person’s overall attitude and personality.

A society holds multiple interactions for which moral values are highly essential to build relationships. Moral values teach an individual the right and wrong in society. For instance, while talking with elders, one uses reverence, love, and compassion that mould good moral character.

Moral values play the role of peacemaker through conflict resolutions and prevention. It builds good relationships and helps resolve conflicts. Through the establishment of relations, a society’s economy is also established. It conducts smooth trade business transactions among the people of the nation. Thus, a community blooming with peace sees an improved quality of life and productive development.

Society is established through moral values. However, the growth and development of these values remain challenged by interactions and migration from diverse cultures and societies. These interactions dissolve morals leading to the assimilation of multiple or a hybrid culture.

Education and Poverty are the two main challenges to moral values. While school gives a child the option between good and wrong values, poverty creates vices such as deceit, theft, struggles, and strive for survival.

A student’s life is a cycle of challenges and changes. As a child grows, he or she imbibes a lot of lessons and moral values. While some may get forgotten, some stick till the rest of life. Therefore, it is highly essential to inculcate moral values in students’ lives as their hands lie in the future. Students with ethical values become responsible people, while those spoiled become a threat to society or culture.

In short, moral values aid a person to make the right choices and decisions in life. It directs an individual’s behaviour and makes him or her set clear goals. A person embracing moral values such as loyalty, honesty, compassion, consistency, kindness, reliability, efficiency, courage, and determination, builds a better character.

The writer is an independent political analyst who writes on politics, political and human-centred figures, current and international affairs.