One Month into Relocation 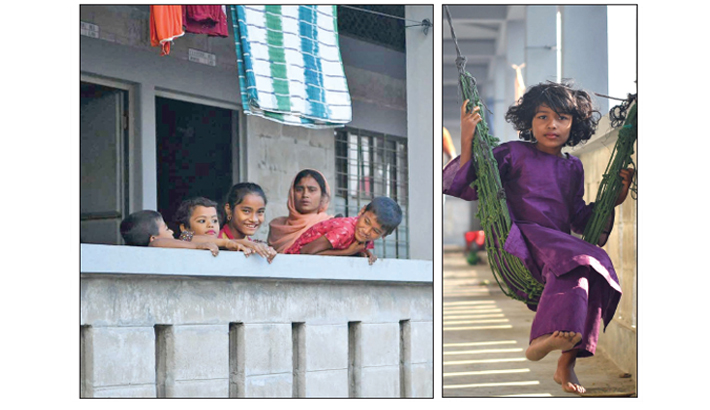 Rohingya children are enjoying the new environment at Bhasan Char island in Noakhali district. The photo was taken on Monday. – PID PHOTO

Rohingyas, who moved to Bhasan Char from unsafe and unhealthy environment of huts made of bamboo and tarpaulin in Cox's Bazar camps, have expressed their happiness at the planned accommodation at the island as one month has elapsed since the relocation.

They said they are happy with the facilities provided by the Bangladesh government for them at the island and they do not want to go back to crowded camps in Cox’s Bazar.

The first group of Rohingyas arrived in Bhasan Char on December 4 last amid concerns from international rights groups. The second batch of the Myanmar’s persecuted nationals landed on the island on December 29. Most of the Rohingyas said the law and order is very good at Bhasan Char and there is no security concern at night.

As part of recreation arrangements, two clubs -- one musical and the other sports one -- have been inaugurated for Rohingyas.

Rohingya youths said they had no such opportunity in Myanmar. They have not received such facilities in the last three years, too.

They said they were happy to get this opportunity at Bhasan Char.

Commodore Abdullah Al Mamun said, “Rohingyas are happy. The sooner we can arrange livelihoods for them, the better it will be to manage.”

In the first phase, Bangladesh relocated 1,642 Rohingyas to Bhasan Char while the second batch of 1,804 Rohingyas reached the island on December 29.

The once remote island was radically changed in just two years. Once upon a time, there was nothing but a few trees and a few buffaloes. Bangladesh Navy has transformed that island into a new town.

The project was implemented at a cost of Tk 30.95 billion.

There are a total of 1,440 cluster houses and 120 four-storey shelter houses at Bhasan Char to temporarily relocate a section of Rohingyas. These cluster houses have been built in the style of cluster villages with each having 12 houses.

And each house has 16 rooms with each room accommodating four people.

The mobile phone network in the island is provided by Grameenphone and Robi. A fire station is also there.

The project director said necessary steps have been taken to deal with the natural calamities at Bhasan Char, located 51.8 kms off Patenga and 8.3 kms from Sandwip in Chattogram, and 24.5 kms off Hatiya in Noakhali.

“For this, the data of all types of storms in the Bay of Bengal in 172 years have been analysed. Besides, the nature of natural disasters in the region has been taken into consideration for 10,000 years,” he added.