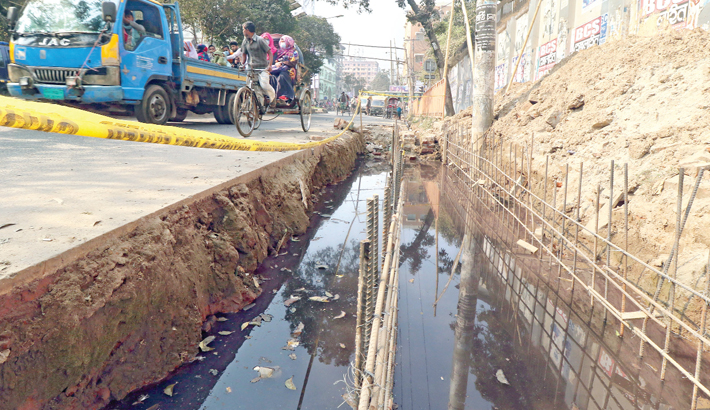 A drainage line is being installed on the footpath of Azimpur-Palashi road in the capital. The photo was taken on Sunday. - MD NASIR UDDIN

The utility service providers like Water Supply and Sewerage Authority (Wasa) and Titas Gas Transmission and Distribution Com-pany Ltd need to follow certain rules and the SOP set by the government and supervised by the two city corporations of Dhaka for carrying out any development work.

According to the rules, utility service providers must submit ‘As Built’ designs of underground resources to city corporations before going for any development work. But most of the agencies do not submit updated designs.

Talking to the Daily Sun, DSCC Chief Executive Officer ABM Amin Ullah Nuri said they are asking the utility service providers to follow the rules properly. “We’ve asked all agencies to submit their plans to carry out the development work in a coordinated way. We’ve already announced that we won’t accept any application for road digging from utility service agencies after August,” he said. If any service providing agency wants to carry out any development work, it must take prior permission from the city corporation concerned, he said, alleging that the service providing agencies are not following the rules.

DNCC CEO Selim Reza said they have already set up a One-Stop Cell for giving permission to dig roads of the capital. “Despite the sufferings of the residents, we’re sitting regularly to give permission to the service providers to carry out their development work,” he said.

Noted urban expert and Chairman of Centre for Urban Studies, Dhaka Prof Nazrul Islam told the Daily Sun that people suffer as roads are dug on both sides in an unplanned way, leaving no option for pedestrians.  “Besides, the utility service providers don’t complete their work in time,” he said, adding that even the city corporation itself left a road at Dhanmondi incomplete for long.

He said if the issues are not addressed properly, problems like accidents and financial losses will continue. “Our city corporations have to be more efficient in monitoring and coordinating the road excavating work. Our two mayors have to take the leading role to address the problems,” he said.

Sources said the government approved a policy and the SOP in 2019 and made it mandatory for utility service providers to follow those while carrying out installation, repair and renovation work on underground service lines.

They also said the city corporations possess the authority to give permission for digging roads and ensure the compliance of the policy and the SOP.

As per the policy, any utility service provider has to obtain permission from the city corporation concerned before going for excavating any road.

According to the SOP, the excavation work has to be carried out at night while proper safety measures have to be ensured at the sites, including setting up of signal lights, and rubbish will have to be removed within 24 hours.

It asks for avoiding road cutting during the monsoon -- in May, June, July, August and September -- but most of the works are done during this period.

However, Wasa and other agencies do not follow the policy known as Dhaka Mohangar Sarak Khanan Nitimala and the SOP.

Barely three months into the construction of two roads at Uttara, Dhaka Wasa dug those recently for installing pipe, in a glaring example of lack of coordination in the development work.

Meanwhile, DNCC on Saturday filed a general diary with Uttara West Police Station against the Wasa contractor for cutting the two roads without permission.

The two road roads -- 13 and 34 -- at Uttara Sector-7 were constructed in August, DNCC officials said.

Despite repeated attempt, Wasa Managing Director Taqsem A Khan could not be reached for his comments as he has the lone authority to speak to the media.

Accidents are taking place in many places for the excavation work, city corporation officials said.

For lack of an updated design, the gas line of Titas was damaged at Dhanmondi-27 and a fire incident occurred in August during the construction of storm sewerage line by the DSCC.

During a recent visit to Madani Avenue at Gulshan in the capital, it was seen that Dhaka Electrical Supply Company (DESCO) Ltd is installing their supply line underground.

He also said they are preparing an underground resource map.

Titas MD Ali Iqbal Md Nurullah told the Daily Sun that they do not have the design. “I’ve already directed our officials to prepare a map of underground resources. We’ll be able to complete it at the beginning of the upcoming month. I hope we’ll be able to provide the map to the corporations next year.”

According to the manuals, the utility agencies need to provide their master plans, mega projects, annual development plans to the city corporation concerned twice in a year.

Officials of both the city corporations said they are not getting a good response from the service providers to this end as only three providers responded positively.