Factors related to tobacco use and solution 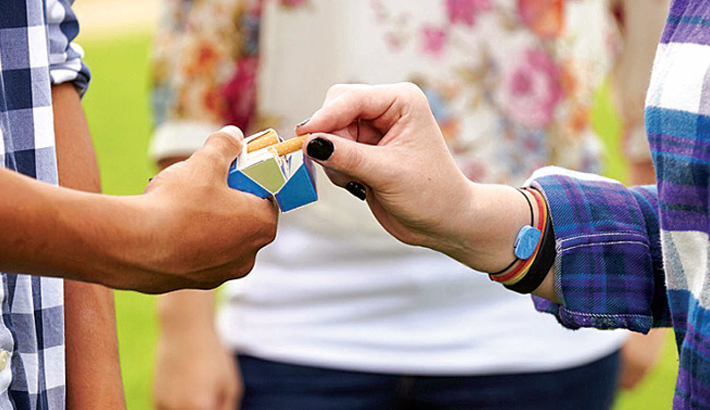 Young generations are undisputedly the future leaders. But can you consider a world without potential leaders? Hardly affirmative, right! In this current digitalised world people can hardly lift up their eyes above their mobile screens. Let alone executing some productive changes. People have become nuclearised, self-centered and busy in their own ways of life. But one thing should strongly be remembered. Just like the way a seedling turns out to be the source of food and shelter for countless people out there with proper nurturing. Similarly, the slightest positive change, proper guidance and nurturing for today’s young generation will indirectly drive us all towards a better future. It is high time to give utmost priority to the young generation. But a major drawback sets us back.

Recently a research study was conducted by Jahidur Rahman Khan and his team which correctly brought to light the monstrous confounder that drives the youth into sheer darkness. Let’s share the snippet from that research paper in this article. The researchers conducted a research study amongst 3150 students reading in grade 7-9 with age ranging between 11-17 years. The students were enrolled from 50 different schools of which included 25 from urban areas and other 25 from rural areas of Bangladesh. To a matter of fact the study was not only centralised to Bangladesh alone but also consistent with the results of developing countries like Nepal, Sri Lanka, etc. The study found out that the prevalence and correlates of tobacco use was more among students in grades 7-9 of the educational institutions. Tobacco use was also related to age and exposure to tobacco related socio-normative influences.

A number of incumbent factors precipitated the outcomes of tobacco use in those children. Executing a high level cognitive analysis on the question of interest, the following factors came into light:—

1)    Tobacco being offered by friends and vendors:

Jahidur Rahman Khan and his team showed the odds of tobacco use when offered by friends. They showed that the prevalence of tobacco consumption was drastically more in children by 2.53 times just by the influence of friends rather than not offered by friends in the sample population. This statistical data counted first amongst all other factors. Even this finding was consistent with the contemporary research findings from the other developing countries like Nepal, Sri Lanka and so on.

The researchers highlighted on the free tobacco products as a major precipitating factor for tobacco use amongst the youth. They explained that the prevalence of tobacco use was more when it came within the accessible reach of the students, either free of cost or when within their provided pocket money from their parents. If the tobacco products were free of cost or offered by vendors at minimal prices, the odds of tobacco use was 1.76 times more. Even statistical calculations depicted that the odds of tobacco use was significantly more due to watching advertisements and promotions in T.V., videos, stores, shops and street vendors by 1.68 times than those who did not see those product promotions.

4)    Prevalence of tobacco use/smoking at home by adults:

The research study well highlighted the odds of tobacco use or smoking of students. Statistically, the study showed that the prevalence of tobacco use and smoking was greater in home than outside by 1.39 times. Students either tried to imitate their elders like fathers, grandfathers, teachers, etc. as a manner of showing their transition into adulthood or in quest of becoming so-called iconic amongst the friend circles.

5)    As a trend depicting adulthood:

Large population of male teens in Asian countries take up smoking as a social and normative behaviour associated with the transition to adulthood. Even the tobacco use was not ignorable in females of the sample population. The overall impact of globalisation, urbanisation, marketing efforts of the tobacco industry and changing socio-economic and socio-normative status of women precipitated the prevalence.

So aren't there any solutions? Definitely yes.

1.    Responsible attitude of parents, family members and adults towards children:

Parents need to be aware and keep an eye on their children’s whereabouts. They need to observe the friends their children are growing up with. Provide them with good upbringing and high morals. They also need to minimise the pocket money of the children in order to limit their children's accessibility to tobacco products, cigarettes, etc. Parents and elders like teachers need to refrain themselves from smoking and tobacco use in front of the students. This will impasse the infiltration of wrong notion to the students of becoming so-called iconic among others or depicting their adulthood just by smoking/tobacco consumption.

2.    Strong implementation of government policy on industrial production of tobacco, cigarettes and bidis:

The government needs to be deft and increase the price of per unit tobacco, cigarette or bidis in order to make it beyond the accessible reach of students. Thus, if such a strong verdict is made by the government and executed strongly, the prevalence of tobacco use and consumption will tremendously jolt tobacco's monstrous regime and the use will get decimated among the youth. The government’s policy on monitoring the use of tobacco will also prevent the mass use of tobacco products and keep it under control.

Thus, the implementation of an integrated socio-ecological intervention strategy will gash the tobacco use amongst the youth and wind it down. In this way, the students will be free from the brutal clutches of tobacco use and can spend more productive and efficient time in shaping their careers. This will eventually hone the future of the nation in myriad ways.