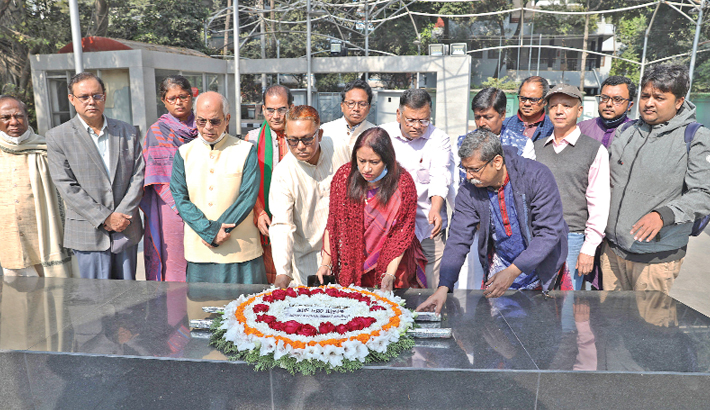 Farida Yasmin, the first newly-elected female president of Jatiya Press Club, along with other leaders pays homage to Father of the Nation Bangabandhu Sheikh Mujibur Rahman by placing a wreath at his portrait at Dhanmondi in the capital on Saturday. — SUN PHOTO

Farida Yasmin, the first newly-elected female president of Jatiya Press Club, on Saturday paid rich tributes to the Father of the Nation Bangabandhu Sheikh Mujibur Rahman at Dhanmondi in the capital.

Farida Yasmin, who served as the general secretary of the JPC in the previous term, made history by becoming the first female president of the JPC in its 66-year history.

She bagged 581 votes in the JPC election held on Thursday while her rival candidate Kamal Uddin Sabuj of pro-BNP forum polled 395.

Pro-Awami League forum senior leaders, including Iqbal Sobhan Chowdhury and Manjurul Ahsan Bulbul, among others, were also present on the occasion.