The Queen’s Gambit: Inside the head of a chess prodigy 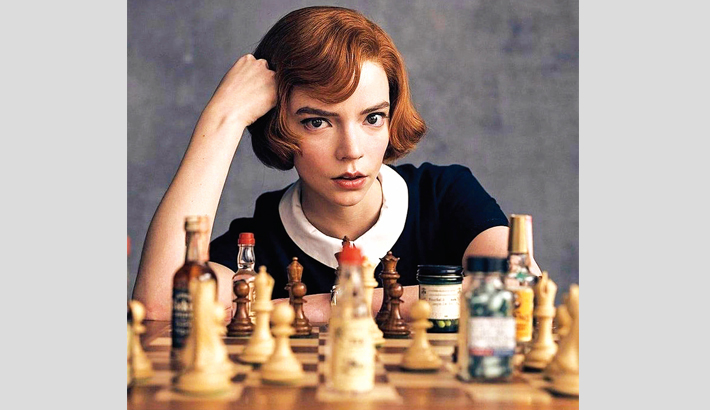 We are surrounded by people with a plethora of capabilities, ranging from artistic and creative to quick and observant. Amongst them are a handful of gems that are masters in their own fields, intriguing the spectators by excelling in a sport known to the common. Have you ever thought how eye-opening it could be to watch their lives unfold and their rise to success closely, under a microscope? As if you were right by their side watching them grow into this mind blowing prodigy? Well look no further, as Netflix’s ‘The Queen’s Gambit’ provides you with just that experience with an interesting sport known to all; chess.

The story encompasses a young Beth Harmon who lost her mother to a car accident and found herself in an orphanage. Her life there was dull and drab, and in the monotony of it all she found herself being interested in the game the janitor of the orphanage would play by himself in the basement. Mr. Shaibal then eventually found himself teaching this young soul the rules and intricacies of this very elegant game, and being astounded by how quickly she mastered the world of 64 squares.

From Beth’s perspective, she found herself so soaked into this game because she felt the safest and most ‘in control’ in this world. She discovered herself through this game, which drew her into it even more. She would stock and take the tranquilliser pills provided by the orphanage at night in order to visualise her games on the ceiling, which is a visual focal point of the mini-series. This sequence hints a buildup of addiction within her even as she grows older. But it’s not the just the physical addiction to pills and alcohol that is noteworthy here, but how she gets addicted to winning.

Every tournament of hers is very captivating to watch, not because of the game itself but because of the dynamic established between her and her opponent. She plays like she’s preying on them with her wooden pieces, staring into their soul with every move.

However, in the matches where she does not prevail, her downward spiral is instantaneously captured through the beautiful cinematography; her feeling suffocated in the trap laid out by the opponent, her reluctance to resign, the despair in her eyes when she does resign, all showcased in a climatic sequence.

The juggle between her finding her place in a very backward world as a young woman, wowing all these men known to be chess geniuses, and her hitting bottom rock with her adamancy just that much spectacularly, keeps the viewers at the edge at all times. You see, the show really isn’t about chess. It’s about self-discovery, growth, dynamics, friendship, recovery. The chess guides the story, revealing who Beth Harmon really is. And of course, it all builds up to an amazingly satisfying ending that you just do not want to miss.

There was a real chess prodigy of the 19th century. Paul Morphy, according to the show, used to play like a shark and crush the masters one after another, but he later slipped into a ‘muttering paranoia’ and died. He was called ‘The Pride and Sorrow of Chess’. Genius comes at a cost. And that cost and balance is portrayed through a fictional Beth Harmon in Netflix’s mini-series, ‘The Queen’s Gambi’t. Give this show a shot, it’s worth your time.

The writer is a student of A2 level, S.F.X. Greenherald Int’l School.