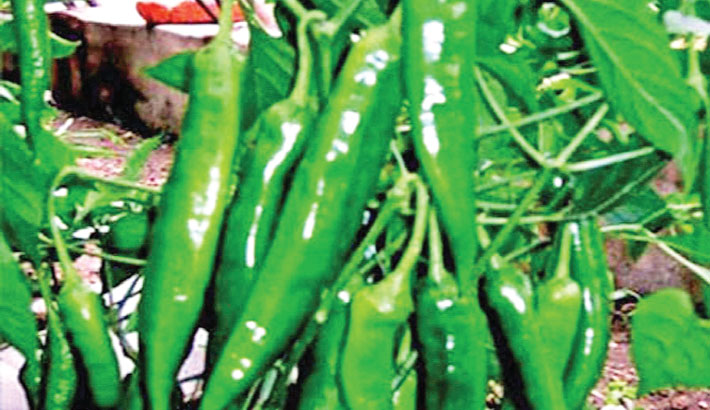 The farmers are also happy over its good price in the local markets.

Chilli cultivation is gradually gaining popularity in the district as the farmers get good return with low labour and production costs.

Apart from flooding the local markets, the essential item of preparing curry is being supplied to other parts of the country including capital Dhaka, Narayanganj as harvesting of the crop is going on in full swing in the district.

Due to the bumper harvest of the crop, makeshift chilli markets have been set up at different villages in district.

Each maund of green chilli is now being sold at Tk.750-850 at the wholesale markets where traders from different parts of the country come to buy it.

Deputy Director of DAE Md Aminul Islam said farmers have already started plucking green chilli and they are also getting fair price of the chilli. If the weather remains favourable farmers will get bumper production of green chilli this year, he added.

This year’s chilli production would surpass all the records of the last years in this district, he said. He also said cultivation of chilli is quite easy and usually less expensive than the other crops. He pointed out that a farmer could easily earn Tk.20,000 to Tk.25,000 by growing chilli in a bigha of land.

Replying to a query he said it is possible to produce up to 30-32 maunds of chilli per bigha of land if the climate favours and farmers take care properly to the field.