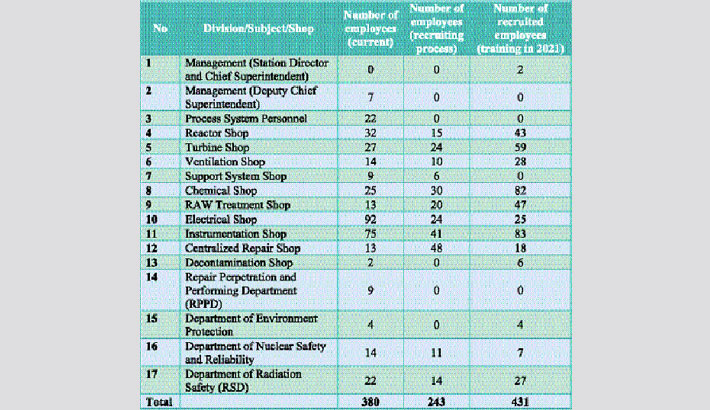 The government will recruit a total of 664 officials by 2021 in two phases to operate, maintain and manage the country’s maiden nuclear power plant at Rooppur in Pabna, official sources confirmed.

A station director and a chief superintendent will be appointed for the plant under the new recruitment process.

Of the total manpower, 243 officials, including station director and chief superintendent, will be recruited immediately because the Rooppur Power plant authorities have already completed all the formalities to complete the recruitment process. Besides, another 421 officials will also be appointed in several phases in the current fiscal year, according to sources.

The government will finalise the organogram to operate the power plant with the support of International Atomic Energy Agency (IAEA), official said.

The Rooppur Power Plant Authorities have a plan to train up 1,925 officials with the support of Russian contractor JSC Atomstroyexport as per the contract agreement.

A total of 1424 officials have got training so far under the general contract and another 517 officials have been sent to Russia for training on the operation of Rooppur Power Plant.

The Commercial Operation Date (COD) of Rooppur Nuclear plant may be delayed by 4-6 months as the Nuclear Power Plant Company Bangladesh Ltd has rescheduled the roadmap implementation due to the disruption caused by the coronavirus pandemic.

Besides, the Russian Contractor has sought to activate the ‘force majeure’ provisions in face of the global pandemic, reliable sources confirmed. As per the requirement of the Russian contractor JSC Atomstroyexport, the government has rescheduled the project implementation period this month.Now, the unit-1 is expected to commence provisional takeover or pre-commercial operation from February 17, 2024, which was previously scheduled October 2023. The unit-1 of the plant will commence operations in February 2025, official sources confirmed.

Besides, the work of loading uranium fuel into the first reactor will begin on February 21, 2023, as per the new schedule which will be on October 8, 2023, for unit-2.

The Finance Ministry of the Russian Federation has allocated $1600 million in the current year with the condition of 0.5 per cent of commitment fees as per the IGCA credit deal with Bangladesh for implementing the power project. A workforce of total 11,000 people including 2000 foreign officials is working relentlessly to implement the project.

Some 2417 foreigners are now working for NPP site and another 2500 foreigners will join the project within December. Rooppur Nuclear Power Plant will consist of two power units equipped with two VVER reactors, the life cycle of which is 60 years with an option to extend the service life for another 20 years. The power capacity of each unit will be 1200 MW.