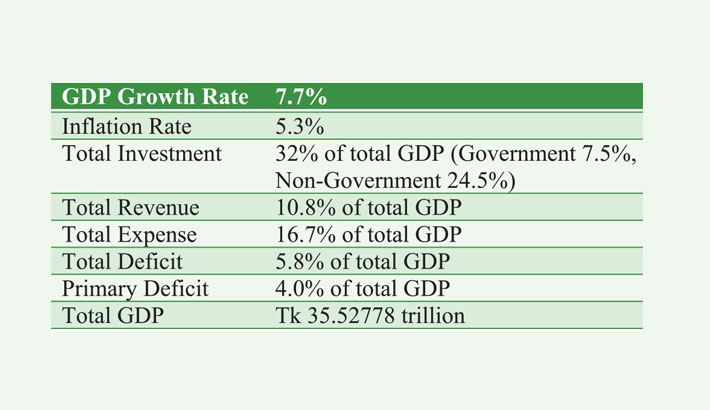 The size of the next fiscal’s budget is likely to be Tk 5,925.65 billion or GDP’s 16.7 per cent to pump in enough funds to priority areas to support economic recovery from Covid-19 impacts.

Revised budget outlay for the current 2020-21 fiscal year is going to be downsized by 5.28 per cent to Tk 5.3 trillion from Tk 5.68 trillion. The new budget will be 10.1 per cent larger than the revised budget.

The tentative budgets size was fixed in the FY21’s first meeting of Budget Monitoring and Resources Committee held at the secretariat with Finance Minister AHM Mustafa Kamal on Thursday, finance ministry sources said.

Of the estimated budget of FY22, the size of Annual Development Programme (ADP) will be 8 per cent higher at Tk 2,130 billion while operational expenditure will stand at Tk 3,795.65 billion, which will see an 11.3 per cent rise.

“Today we sat to take a decision on the size of the next fiscal’s budget. The size will remain more or less unchanged finally with only little modification,” said a finance ministry high official, seeking not to be named.

In line with the projection made under mid-term macroeconomic framework (MTMF), the budget deficit is set to go up to 5.8 per cent of GDP from this fiscal’s 5.5 per cent.

Revenue earning target has been preliminarily set at 10.8 per cent of GDP, higher than this fiscal’s estimated 10.19 per cent and 9.4 per cent of FY20 that went through an economic turmoil.

With the increased expenditure plan, the expects to achieve a realistic 7.7 per cent GDP growth while keeping inflation rate at 5.3 per cent to revamp the economy dented by the unprecedented global virus pandemic.

The government set an ambitious target of an 8.2 per cent GDP growth for the current fiscal year despite the hopes for the same growth rate in FY20 had been shattered by the corona pandemic with a 5.24 per cent growth.

The 8.2 per cent growth projection is going to be lowered to 7.4 per cent this fiscal, given the ground realities resulted from the corona crisis, according to official sources.

Next fiscal’s revenue-GDP target will be much lower than 11.10 per cent target set in the 8th five-year plan approved on December 29.

In line with 8th five-year plan, private and public investment targets are supposed to be 25.17 per cent of GDP and 8.2 per cent respectively.

Meanwhile, the government has managed to spend Tk 814.01 billion as operational expenditure and Tk 384.73 billion from ADP in the first five months from July to November.

The government has set nine priority areas in the new budget, including the allocation of sufficient funds to the government’s special priority sectors amid Covid-19.

With the new budget, the government eyes to successfully implement its Covid-19 stimulus packages with increased allocation on the health sector and providing incentives and compensation.

Agricultural mechanization, rehabilitation, incentives on irrigation and seed and continuing subsidy on fertilizer; huge job creation and rural development will get priority.

In addition, the social safety net will be widened further alongside providing accommodation for homeless people in line with the government’s commitment to Mujib Borsho.

The government wants to continue providing food to low-income people at low cost or free of cost while putting special focus on human resource development through improving education and skills.