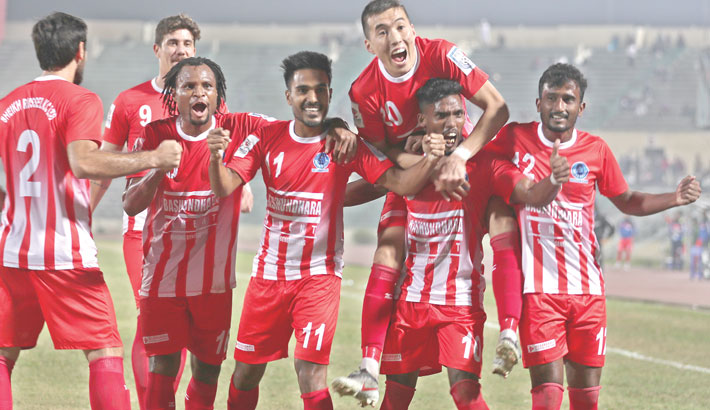 Sheikh Russel took the lead in the 6th minute while Tajik defender Asrorov headed into the net, off a corner from Kyrgyz midfielder Baktyir Duishobekov (1-0). In the 39th minute, Sheikh Jamal’s local defender Rezaul Karim made a blunder in the midfield and failed to clear the ball. Nigerian midfielder Obi Moneke seized the opportunity and extended the margin (2-0).

After half-time, Jamal finally got a chance in the 49th minute while Sheikh Russel’s midfielder Didarul Haque wrongfully tackled Uzbek midfielder Vali Jonov Otabek inside the box. Referee rewarded Sheikh Jamal with a penalty and their captain Solomon King Kanform opened account for his side (2-1).

In the 59th minute, substitute local forward Toklis scored the third goal for Russel utilising a header from forward Giancarlo Lopes Rodrigues, off a free kick from midfielder Baktyir (3-1). Jamal continued their attacking football and got a chance to reduce the margin again from penalty in the 90th minute. Solomon King bagged the chance and scored his second goal (3-2).