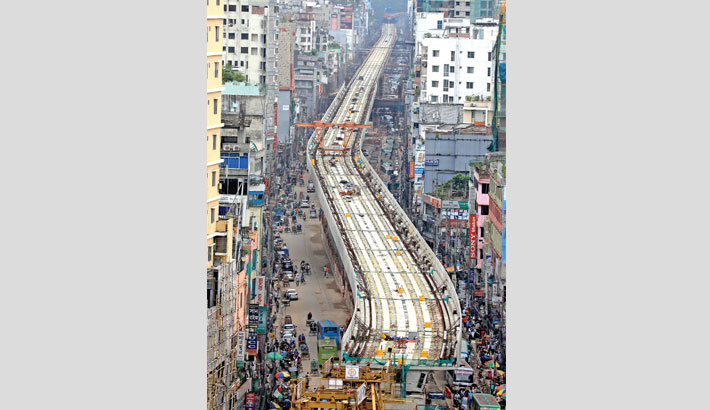 The country’s first overhead metro rail is expected to start its test and trial run at the beginning of 2021, reports BSS.

“We are hopeful about bringing the train sets in February in the country from Japan and after that the integrated test and trial run will be conducted,” Managing Director of Dhaka Mass Rapid Transit Limited (DMTCL) MAN Siddique told BSS on Wednesday.

At least 19 times trial run of each train need to be conducted in Japan before shipment, he said, adding, “Manufacturing of four train sets for Mass Rapid Transit Line-6 (MRT) have been completed and one set was scheduled to be completed on Wednesday in the factory in Osaka.”

“We need a total of 24 train sets having six passenger coaches each, of which five were completed. Some 15-km out of 20-km viaduct erection has been completed, while setting up of 14-km viaduct and in the depot rail track has also been completed,” said Siddique.

The managing director said that construction of all metro stations were going on in full swing during the coronavirus pandemic with maintaining health guidelines strictly.

According to the project details, the metro rail is projected to carry 60,000 passengers per hour by traveling the entire route of 21.26 km from Uttara to Motijheel-Kamalapur Railway Station in less than 40 minutes. It said if the current pace of work continues, by following safety rules, during the ongoing coronavirus situation, the rail project might be completed within December 2022.

The length of the metro rail route up to Motijheel was 20.10 km. But now it was extended to Kamalapur Railway Station by 1.16 km. As a result, the number of stations was also increased to 16.

Physical survey was going on before alignment of the extended route from Motijheel to Kamalapur Railways Station, which will complete this month.

It said the overall physical progress of the first phase construction from Uttara to Agargaon is 79.62 percent and second phase progress from Agargaon to Motijheel is 48.51 percent, while the overall progress stood at 54.59 percent. The project details said around 11.04-kilometer viaduct, partial structure of the 20.1-kilometre-long metro rail system for Dhaka city, became visible between Uttara and Agargaon.

It said sub-structure of nine stations was completed, while concourse roofs of Uttara North, Uttara Centre and Uttara South were finished. Concourse roofs construction of Pallabi, Mirpur-11, Mirpur-10, Kazipara and Shewrapa stations is going on.