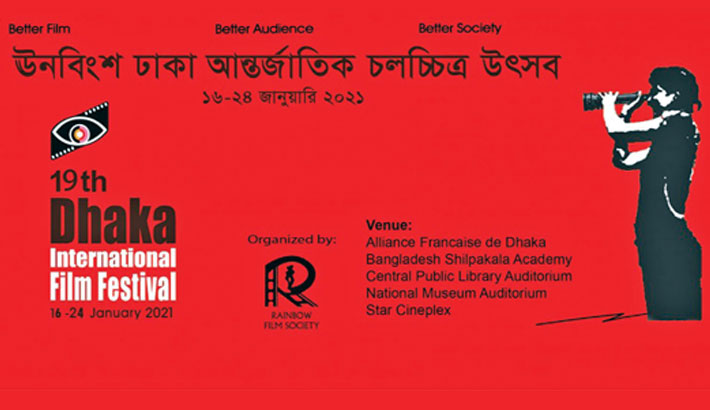 With the theme of ‘Better Film, Better Audience and Better Society’, the 19th edition of Dhaka International Film Festival (DIFF) will begin on January 16, 2021.

The organiser of the eleven-day festival will screen a total of  227 films from 74 countries, in eight competitive categories, including, ‘Asian Competition’, ‘Retrospective’, ‘Bangladesh Panorama’, ‘Cinema of the World’, ‘Women Filmmakers’, ‘Children’s Film’,  ‘Short and Independent’ and ‘Spiritual Films’.

The film screening will be held at Bangladesh National Museum Auditorium, Bangladesh Shilpakala Academy Auditorium, Central Public Library Auditorium, Alliance Francaise de Dhaka and Star Cineplex. Those interested to watch the films online will have to register in advance. Due to coronavirus pandemic, Dhaka International Film Festival will be using the virtual platform for the first time alongside screening at the cinema halls.

Besides film screening, Rainbow Film Society will be hosting a two-day women conference titled ‘seventh International Women Filmmakers Conference’. This conference will be held on January 17 and18. Women filmmakers, actors and personalities from all over the world will take part in the programme.

The first DIFF was organised in 1992 by the Rainbow Film Society, whose members are film enthusiasts solely dedicated to the promotion of a healthy cinema culture in Bangladesh and celebrating the blending of contemporary films from all over the globe since 1977.

The aims of DIFF are to create a space for young and aspiring filmmakers in Bangladesh so they may connect with global artistes and learn international filmmaking standards, alongside opening up global markets for Bangladeshi.

The 19th edition of the festival will be concluded on January 19.