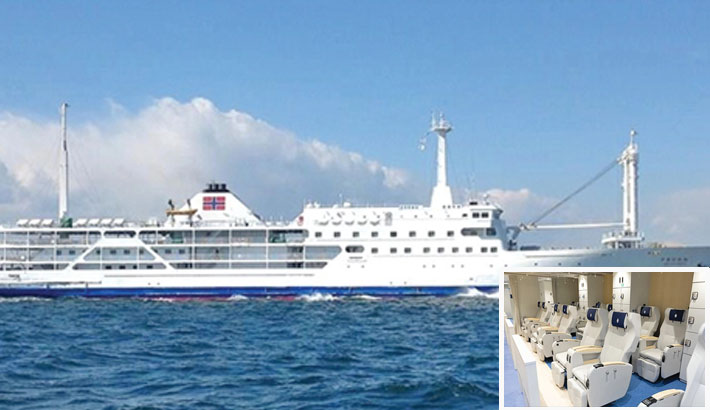 Cruise ship or luxurious vessel is one of the prime attractions of ‘Sea tourism’ in the world. Although these pleasure boats float in the deep sea but here all civic facilities are available and arrangements for enjoying the harmony between the blue sheet of water and sky. At the same time, the best moments of vacation and leisure may also spend here. But so long, it was beyond our reach to make tour by the luxurious cruise ship even after getting repeated efforts due to various difficulties and complications.

At last, that opportunity of the doorway is going to open by the foreign cruise ship ‘Bay One’. Now the opportunity of drifting the body through the salty sea air by the luxurious cruise ship will be available on demand. The famous ‘Karnaphuli Ship-builders Ltd’ of Chittagong is now providing this amazing opportunity.

It has assured from one source of the organisation, that this foreign luxury cruise ‘Bay One’ has bought from Japan with a view to provide international level tour experience to the travelers. Although the previous title of the ship was ‘Salvia Maru’ but confer the name as ‘Cruise ship Bay One’ after getting into Bangladesh. On 19th September, Saturday, the ship has reached at Chittagong Port. Now it is anchored at the jetty of the ‘Chittagong Marine Fisheries Academy’. The pleasure boat will commence the service facilities to the travelers on 21st December by way of recent approval of the government. In the occasion of inauguration on 20th December, there make arrangements of celebration programmes in Chittagong and Cox’s Bazar. In the ceremony, State Minister of the Water Transport Ministry of Bangladesh government Khalid Mahmood Choudhary, MP will be pleased to present as the chief guest, State Minister of Civil Aviation and Tourism Ministry Md Mahboob Ali, Secretary of Water Transport Ministry Md Mezbah Uddin Choudhary, © PCGM, NDC Commodore Abuzafar Md Jalal Uddin and Mayor of the Cox’s Bazar Muzibor Rahman.

Primarily this royal ship will facilitate the pleasure among the travel-lovers by the sea trip from the beach of Cox’s Bazar to Saint Martin. But as the ship is endowed with IMO star level registered sea vessel, so the authority is considering to pleasure trips from Chittagong to Cox’s Bazar and surrounding areas of islands. In the meantime a process of constructing a jetty-pier at Daria Nagar in Cox’s Bazar for birthing the cruise has finalized.

This pleasure boat contains two thousand Presidential suites, Bunker bed cabins, Twin bed cabins, Comfortable chairs along with seats of different categories. It also has a restaurant, automatic vending machine and coins operating fountains. The authority has decorated the ship in new look according to Bangladesh perspective, so now the cruise has the arrangements of more than two thousand seat capacity.

Once the ship used to travel from Tokyo to Oshima - Toshima - Nizima - Shikinizima - Kozushima and in summer as ‘Tokyo One Nurwison in Tokyo Bay Night Cruise.

Ship identifying website ‘Vessel Finder’ has informed that the ship has started for Bangladesh from the beginning of the current month. On 9th September it was crossed the East China Sea. On 15th September this ship started from Singapore heading towards Chittagong Marine Port. On 19th September this luxurious foreign cruise ship Bay One’ has reached at Chittagong Port through Andaman sea and Bay of Bengal.

One of the high officials of the ‘Karnaphuli Ship-builders Ltd’ has informed this reporter that the ship has reached at Chittagong on 19th September, Saturday. After completing the necessary repairing and reformation works, meanwhile the cruise is ready to provide passengers services. Although initially we adopted a vast plan for repairing and reformation, but after getting the ship, we observed that it needs not require so much reformation work what we thought earlier. According to the plan, we will be able to serve the people of the country from the next 21st December.