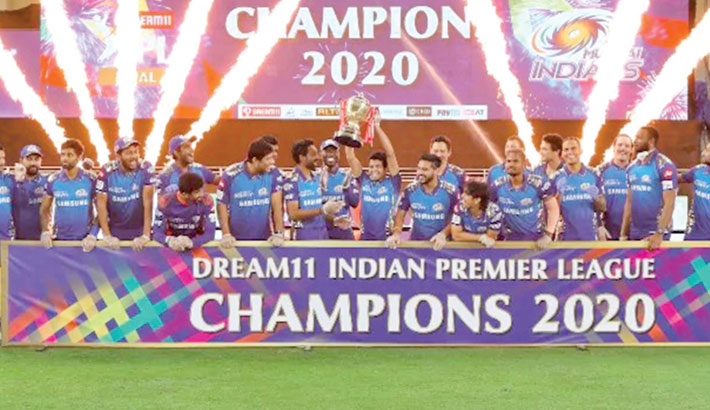 International cricket had resumed in June with England hosting West Indies in a Test series, but the hype surrounding the IPL was certainly a welcome relief for cricket fans and enthusiasts amid a deadly pandemic, reports Firstpost.

In what was a unique and an ‘unusual’ year for many across the world, Mumbai Indians (MI) defied the ‘odds’ to clinch a record fifth Indian Premier League (IPL) in November. Yet, only MI, and no other team, would have seen this ‘first’ coming - the first time MI clinched an IPL in an ‘even’ year. Their previous four titles came in 2013, 2015, 2017, and 2019, all years ending in odd numbers, but that jinx was broken when they beat Delhi Capitals (DC) in the final at Dubai International Cricket Stadium on 10 November.

However, in what was eventually a blessing in disguise in July, the ICC T20 World Cup scheduled to be held in Australia in October was postponed, paving way for the BCCI to conduct the IPL.

It was a closely-fought tournament this time, and for the most part, all seven teams barring Chennai Super Kings (CSK) were in contention to make the playoffs. However, MI were on an entirely different level. Although MI started their campaign with a defeat to CSK in the opening match, they rediscovered their rhythm soon, with five consecutive wins after two defeats in their opening three games.

And amidst all their domination, there was still the Rohit Sharma factor. Midway through the tournament, the MI skipper suffered a hamstring injury against Kings XI Punjab (KXIP) on 18 October, which meant that he would miss his team’s next four matches.

Rohit had an average IPL, having scored just two fifties. His absence meant Kieron Pollard taking over as MI skipper.

DC won the toss, and went on to put 156-7 on board, thanks to fifties from Shreyas Iyer and Rishabh Pant. Boult would end up with figures of 3-30, and in reply, Rohit's 51-ball 68, studded with five fours and four sixes, placed MI on course for the title. Ishan Kishan and Krunal Pandya took the side over the finish line with five wickets and eight balls to spare, scripting a fairytale fifth IPL title.