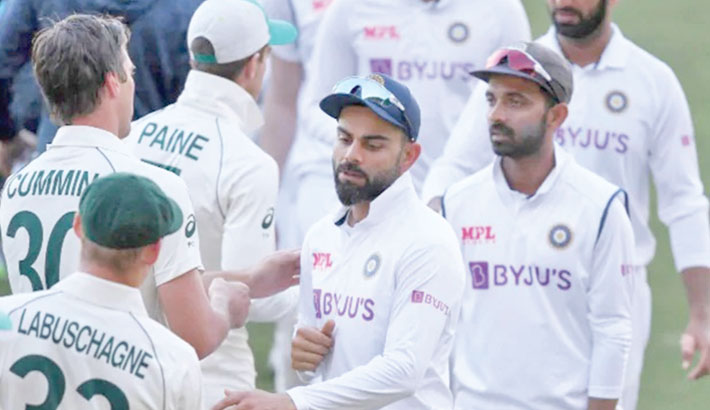 The abysmal score of 36 (India’s lowest total in Test cricket) will continue to haunt the visitors on their subsequent tours Down Under. Notably, this was only the second time in history where all the 11 batsmen failed to reach the double-digit mark in the innings, reports Firstpost.

Long reluctant to embrace the concept of pink-ball Tests, India finally played their maiden day-night Test overseas Down Under. Yes, the visitors had played a pink-ball Test but that was with the SG ball as opposed to Kookaburra and against a much inferior Bangladesh side at Kolkata's Eden Gardens.

Adelaide had become Australia’s den for day nighters, with four of their seven wins coming at the venue prior to the clash against India. Even though the limited-overs leg of the series was levelled at 3-3, the hosts had a psychological edge given their pink ball exploits in the past.

Yet, no one would have predicted that 36-9 would be the manner in which India would succumb to defeat. That too, inside the third day of the Test.

The first two days of the Test were fiercely contested and if anyone, it was Virat Kohli’s men who were in a slightly advantageous position heading into Day 3.

India put on a sensational bowling performance to dismiss Australia for 191. The wily Ravichandran Ashwin (4/55) extracted enough from the surface when all the talk was about both sides’ star-studded pace bowling line ups. Bumrah was at his usual (2/52), and Umesh Yadav (3/40) indicated that he is here to stay as India’s third seamer for the series.

Earlier, in the batting department, skipper Kohli (74 off 180 balls), Cheteshwar Pujara (43 off 160 balls), and Ajinkya Rahane (42 off 92) spent valuable time in the middle and led the way, sneaking India to a respectable 244, given how the pitch was playing.

And then came the third day, where India’s much-vaunted batting line up fell like a pack of cards.

4, 9, 2, 0, 4, 0, 8, 4, 0, 4, 1 – this is how the visitors’ batting scorecard looked, making it only the second time in history where all the 11 batsmen failed to reach the double-digit mark in the innings. The abysmal score of 36 (India’s lowest total in 88 years of Test cricket) will continue to haunt the visitors on their subsequent tours Down Under.

It takes little time for the tide to change, even in the longest format, as was evident with India’s rout.

The turnaround was engineered by Pat Cummins and Josh Hazlewood, who in one early spell combined to pick up four scalps for no runs over 29 deliveries. One could say that nothing went India’s way as almost every edge carried to wicketkeeper Tim Paine, who grabbed a total of five catches. But to Australia’s credit, Hazlewood (5/8) and Cummins (4/21) fully capitalised on the bounce and deviation offered by the surface. Dismissals were as identical as they could be, with both the quicks consistently hitting the good length area outside off and inducing the edges.

Mohammed Shami, the No 11, injured his right forearm after misjudging a Cummins delivery and was retired hurt.

Australia, led by Joe Burns (51 not out) and Matthew Wade (33), completed the formalities, chasing India’s 90-run target in quick time and getting there with eight-wickets to spare.

Former India cricketers felt it was extremely crucial to perform well in the Adelaide pink-ball Test. In that sense, the visitors didn’t set the right tone but the magnitude of the defeat is what will hurt them the most. With Virat Kohli gone and Shami (out injured), it will indeed be a test of character for Rahane and Co.