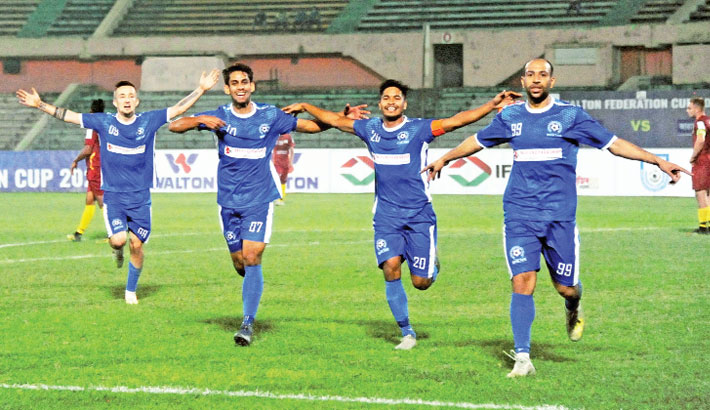 Players of Uttar Baridhara Sporting Club celebrate after scoring a goal against Arambagh Krira Sangha during their Walton Federation Cup at the Bangabandhu National Stadium in the capital on Saturday.

Arambagh Krira Sangha conceded a 2-3 goals defeat to Bangladesh Championship League (BCL) runners-up Uttar Baridhara Sporting Club in the third match of the four-team Group B of the ongoing Walton Federation Cup 2020 at the Bangabandhu National Stadium in the capital on Saturday.

The BCL runners-up Uttar Baridhara, which started campaign in the season’s curtain-raiser conceding a 0-3 goals defeat to Saif Sporting Club, put pressure on Arambagh's defence with their attacking football from the beginning of first half.

National coloured forward and Uttar Baridhara captain Sumon opened account for his side with a right-footer tap-in shot, off a cross from Egyptian forward Abdel Hammad in the 24th minute (1-0).

In the 30th minute, Arambagh defenders made a mistake in the danger zone but Uttar Baridhara forward Sujan made no mistake to double the margin with a smart chip shot over the Arambagh KS goalkeeper Abul Kashem Milon (2-0).

After conceding two shocking goals, Arambagh KS came alive and tried to reduce the margin. In the 37th minute, Nigerian forward Chizoba Christopher sent the ball home with a close-range shot (2-1). After a few minutes, Arambagh got another blow while Egyptian forward Hammad made it 3-1 by his own efforts with a right-footer from inside the box in the 44th minute.

Uttar Baridhara could score two more goals in the first half, but their captain Sumon wasted both chances as his shots deflected by the post in the 22nd and 43rd minutes.

After the half time, Arambagh’s young forward Ucchash scored the second goal in the 75th minute with a header from inside the box, utilizing a cross from the right side by another forward local Miraz Molla.

With the day’s win, Uttar Baridhara kept their chances alive for the quarter-finals.  The BCL champions will play their last match against Brother Union Limited while Arambagh KS to face Saif SC, both at the BNS on Dec 29 at 3:15 pm and 5:45 pm.