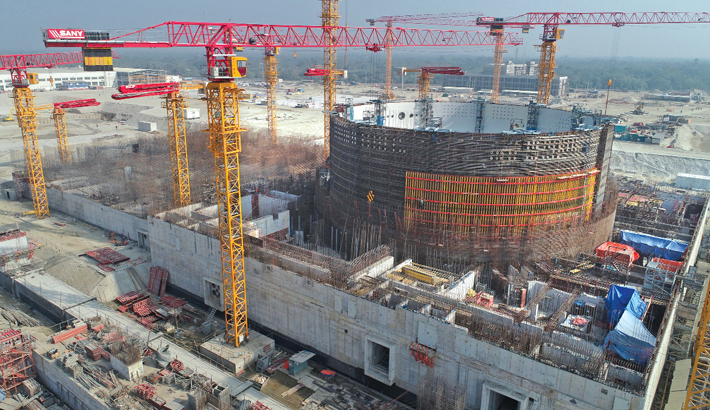 A high-level committee has been formed to oversee and speed up project being implemented under Indian Line of Credit after the projects have been moving in the slow lane.

In line with a director from the Prime Minister, ministry of finance has formed an eight-member monitoring committee, with Economic Relations Division (ERD) Secretary Fatima Yasmin as its head.

“From now on, this committee will take policy decisions with regard to implementation of the Indian LoC project,” an ERD high official said, seeking not to be named citing sensitivity of the matter.

In the last 10 years, India has committed for a total of $7.5 billion credit support to its next door neighbor Bangladesh under three LoCs.

But only $1.26 billion has so far been disbursed while project progress was found slow

The committee will take decision about any LoC project related change, modification, revision or other policy related issues.

For speeding up the projects, the committee will sit once or more in a year to review the project of the LoC projects.

It will give directives sought by LoC and joint meeting team. Any policy decision with regard to the credit will have to be approved by the committee.

Other members of the committee are Indian High Commissioner to Dhaka, an NBR Member, one additional secretary level official from each of foreign, finance and home ministries and the director general of PMO.

Asia Wing chief of ERD will act as the member secretary on the committee. The committee will have to power to increase the number of members, if it finds it necessary.

Prime Minister Sheikh Hasina has taken the decision of forming the committee so that Indian LoC projects get a boost, according to finance ministry officials.

“The committee will sit soon to review the progress of the projects being implemented under the Indian line of credit,” an ERD high up said.

Officials at Asia Wing of ERD, however, don’t think that LoC projects are going slow, arguing that most projects are at procurement stage.

Earth filling and utility shifting of some projects are yet to start, for which fund disbursement seems to be slow, they claimed.

So far, the government has picked up 46 projects under three LoCs, of which only 14 have so far been complete.

Eight projects are going on while another 11 are at procurement stage while 13 are in queue for project proposal development or revision stage.

Out of $862m first LoC for implementing 15 projects, $618.9 million has so far been released until October this year, according to ERD data.

However, 12 out of 15 first LoC projects have so far been complete while three are still going on even though contract for the credit was signed in 2010.

The $2 billion second Indian LoC was signed in 2015 for implementing 15 projects, but total disbursement from this credit line stood at $92.5 million during the period under review.

Of the projects, two have been complete, four are ongoing and tendering process of another four projects is going on while project proposals of the rest of five are either at development stage or waiting for revision.

Contract for third Indian LoC of $4.5 billion was signed in October 2017 to implement 16 projects, but only $5.4 million was disbursed until early November this year.

Power evacuation line of Rooppur nuclear power plant project is going on, while seven third LoC projects are at tendering stage and project proposals are being prepared for the rest of eight projects.