Voyage of a portrait painter 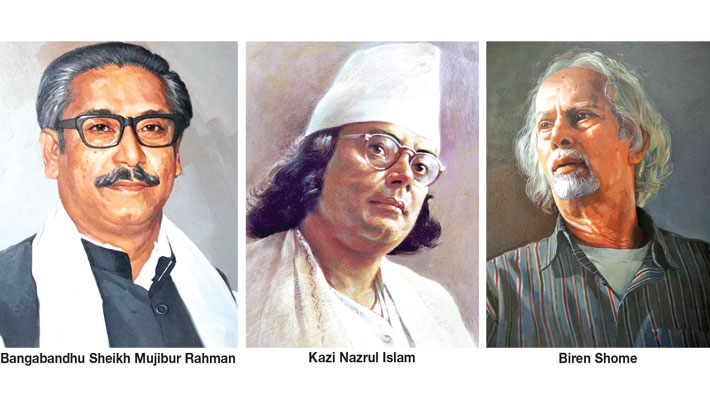 Aloptogin Tushar is one of the distinguished painters from the late ‘80s who enjoy making portraits of prominent men and women representing different eras in the country and sub-continent. These individuals have left legacies. They have reformed, reshaped the society and some of them have given refreshing looks to art, culture, literature and the overall thinking process. Some of them are no more today but their immense contributions remain relevant in our daily lives.

Aloptogin Tushar lent his creativity through a variety of topics in varied mediums. His themes focus on contemporary issues, social and political dilemmas and always stand against inhumanity, injustice and inequality. The artist makes great efforts to leave marks of his intelligence and perseverance in every medium of his creativities.

At different phases of his career, Tusher has also portrayed alluring and elegant women in all their shapely grandeur. His ponderings on portraits, especially women, involve a vast range of themes from reality to fantasy, imagination to imperfection. Sometimes the artist delves deep into a psychological voyage through his surrounding characters.

Painting portraits is considered to be one of the oldest forms of art. From ancient times this art form has been predominantly used to glorify the influential and powerful in the society. All high-ranking families had a personal painter, who only did portraits of each family member. Sometimes, the painter travelled with the royals in hunting missions. Many distinguished artists in the world were commissioned by monarchs. Gradually, this art form crossed the territories of royalty and became popular among the masses the world over.

Those who are usually good at drawing, excel in portraits. There is a serious dearth of portrait painters in the Dhaka art scene despite the art form being well-established globally. Our painters, for some reason, have not shown enough interest in this drawing-based form. Hopefully, talented young artists will show more interest in drawing, which is one of the most significant aspects of art.