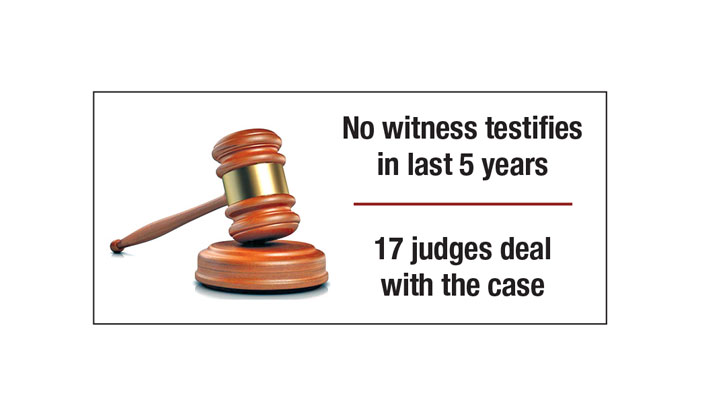 Though over 21 years have elapsed since the murder of Detective Branch (DB) of police informer Jalal Ahmed, the trial proceedings of the much-talked-about case are yet to be completed.

The case is pending in Fourth Additional Metropolitan Sessions Judge’s Court of Dhaka due to non-appearance of witnesses and negligence of concerned officials.

Family members of the victim still don’t know when the trial proceedings of the case will end, when they will get justice and when their long wait will be over.

A total of 17 judges who dealt with the case have been changed during the trial proceedings, but the case yet to see completion.

Recording testimonies of the witnesses in the case began on March 12, 2001. A total of 25 out of 58 prosecution witnesses testified before the court in the case.

On May 25, 2015, the case Investigation Officer (IO) and Criminal Investigation Department (CID)’s special Superintendent Munshi Atiquer Rahman, who is now in jail for negligence during probe of 21 august grenade attack case, gave his partial deposition as 25th witness in the case.

The prosecution has been failing to produce any witnesses before the court for testimony for five and half years.

Court sources said the court is now waiting for recording unfinished testimonies of two important prosecution witnesses -- Munshi Atiquer Rahman and 20th witness rickshaw-puller Iman Ali, who refrained from appearing before the court after his partly testimony on February 4, 2003.

Talking to the correspondent, Public Prosecutor Saiful Islam Helal said, “It is true that the case is much-talked-about and it has been pending for long time, but we are trying our best to complete it.”

“The trial in the case will be completed soon if we can record unfinished testimonies of Atiquer Rahman and Iman Ali,” he said

The state lawyer also said, “Munshi Atiq is now in jail while Iman Ali is not appearing before the court despite issuing non-bailable arrest warrant against him.”

Jalal Ahmed’s half decomposed body was recovered from the overhead water tank of DB’s Minto Road headquarters on March 25, 1999.

Of the accused, Ziaul Ahsan, Billal and Rauf are on bail while Anwar Hossain died on November 24, 2007 while another accused Malek is on the run since filing the case.

According to the charge sheet, DB inspector Ziaul Ahsan used Jalal as a source to collect information about illegal gold and drug smugglings from different areas of the capital.

Tipped-off by Jalal, the accused detained smugglers and seized illegal goods. As Jalal was ‘deprived of his share’, he changed his position and started providing information to the other DB team members.

DB official Ziaul got angry with Jalal on March 13, 1999 as he provided information of a ring of gold smugglers of the then Dhaka International Airport to another DB team.

Later on March 19, Ziaul reportedly killed him on the rooftop of DB office after calling him out from his home and concealed the body into its overhead water tank with the help of the other accused.

Two cases were filed over the murder. At first police filed an unnatural death (UD) case with Ramna Police Station.

When asked, Sheikh Baharul Islam, one of the defence lawyers, said, “The case is now pending as the prosecution cannot produce two impotent witnesses -- rickshaw puller Iman Ali and Munshi Atiqur Rahman -- before the court for deposition.”