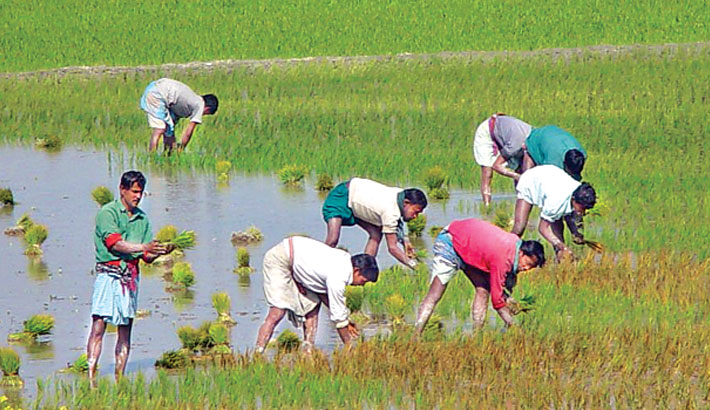 The government has taken various steps to boost the production of rice during the upcoming Boro season in a bid to recoup crop losses of the current Aman season and increase the stock of the staple.

As part of the measures, it will provide hybrid seed for farmers and bring around 50,000 hectares of additional land under cultivation, aiming to produce an additional 7 lakh tonnes of rice than the primary target, said officials at the Department of Agricultural Extension (DAE).

The Boro season fulfils 60 per cent of the country's total demand for rice.

“We’ve taken various steps to increase the rice production during the Boro season to recoup the crop losses caused during the Aman one,” said DAE Director General Md Asadullah.

He said they were giving agricultural inputs to farmers to meet the target of increased rice production.

The DAE chief said Boro is the main season which gives a higher amount of rice to the country’s food bank whereby they have targeted to increase the acreage of Boro paddy.

“The DAE has already set a target of the Boro cultivation. However, the acreage will be increased by about 50,000 hectares of land next year to grow more rice,” he said, adding that they are giving emphasis on hybrid varieties of paddy as those yield higher production than Ufsi ones.

Farmers have already started making seedbeds for the next Boro season.

The government will provide hybrid seed for 15 lakh farmers with each getting it for one bigha of land free of cost.

High-yielding paddy will be cultivated on additional 2 lakh hectares of land following the availability of free seeds, sources said.

However, it aims to produce at least 7 lakh more tonnes of rice expanding the acreage to cover the crop losses caused during the Aman season.

Several phases of flood, prolonged rainfalls and cyclones have decreased the Aman rice production this year, putting the country on a tight edge amid the Covid-19 pandemic.

The production of Aman rice will be around 15 lakh tonnes less than that of the previous season’s 155.02 lakh tonnes due to the flooding in 35 districts during the June-October period, according to a research of Bangladesh Rice Research Institute (BRRI).

The study report said the rice yields might witness a 10.06 per cent fall in the current season, compared to the last year.

Floods that started with heavy rainfall on June 17 did not recede until the end of August and caused Bangladesh’s 200-plus rivers to overflow, impacting over 40 per cent of the country’s landmass.