Painting for a Non-Communal Country 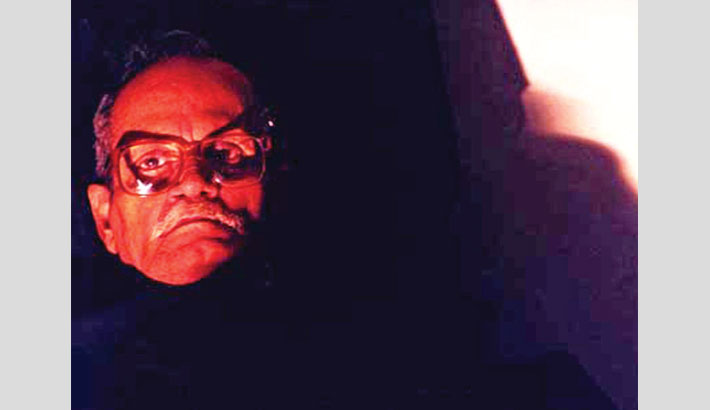 One of the rallying cries Bangalees wanted to propagate during the Liberation War was for securalism. The aristes of the time also wanted to echo the calls. Painter Debdas Chakraborty was among the frontrunners in this drive.

His poster on national equality irrespective of religion is popular to this day. The poster declares that all the Hindus, Christians, Buddhists and Muslims consitute the Bangalee nationalism. Shadows of a church, a pagoda, a mosque and  a mandir (temple) – prayers houses for the four major religions in Bangladesh – are seen with an orange background in the poster. 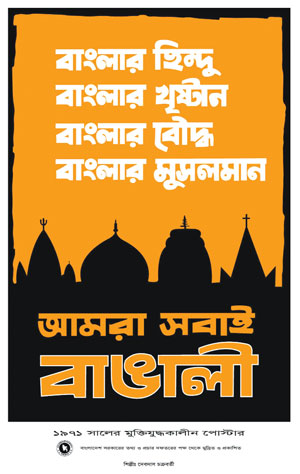 Even though the four biggest religious groups are apparently the chief concerns of the poster, it undoubtedly covers all forms of faith, heralding a struggle to achieve a Bangladesh built on humanity. The poster was a great inspiration for the freedom fighters.

Debdas Chakraborty was born on December 25 in 1933 in Faridpur district.  He had designed many posters and illustrations highlighting the spirit of Liberation War making a significant contributions for out independence.

I’ve not got proper opportunity to meet the veteran painter in his lifetime. But once I saw him when he was in the stage of almost comma and he was bedridden for a long time. During the visit, I was accompanied by Debdas's great admirer late sculptor Syed Abdullah Khalid. I heard about his personality, characters and many remarkable stories from Syed Abdullah Khalid and eminent architect cum-art critic Shamsul Wares.

A versatile individual in arts, Debdas was not immersed in painting only, but printmaking and drawing were also among his favourite mediums of expression.  Following a long and chequered life, he gradually transformed himself into an abstract expressionist painter.

Nature and people were the favourite topics of the artist. Debdas portrayed nature and its mysterious phases through his personal notion, experience and thought process. It can be easily said that his paintings have been recorded with his inner feelings and intense observation of his living place, life and reminiscence.

Debdas used sweeping strokes and sometimes very polished strokes when he used to symbolically portray boats, birds, clouds, fish and the six seasons. His strokes and forms are simultaneously natural and capable of creating a language which is alien to us. His colour is both bright and mellow and appears rich and smooth. Many of his paintings are composition and form based- with varied sizes-rectangular, vertical, horizontal, half-curved and full curved. Space division in his compositions is dramatic; with big spaces kept flat while smaller areas have several tiny patterns. It is obvious that the artist has spent a considerable time to create the illusion of space.

Debdas received higher training in printmaking from Warsaw, Poland under the Polish Government Scholarship Programme. Several prestigious awards were conferred on him for his contribution in cultural arena, including the Ekushey Padak in 1990.