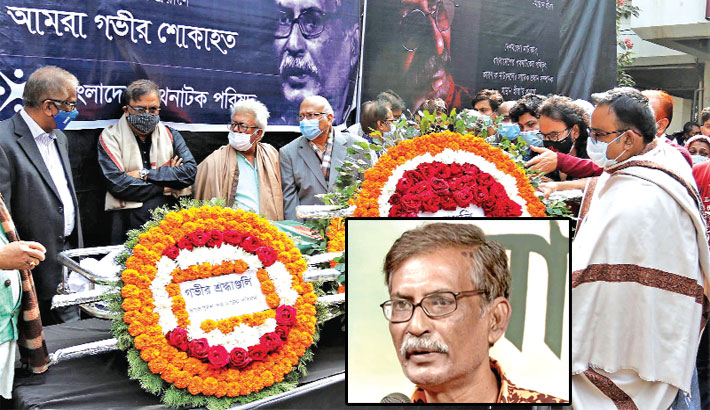 Colleagues, friends and well-wishers pay their last respects to dramatist and playwright Mannan Hira on the premises of Bangladesh Shilpakala Academy on Thursday. — Sun Photo

He breathed his last at 8:30pm on Wednesday at a hospital in the capital.

The 64-year-old playwright was rushed to the hospital immediately following a heart attack. He died shortly after being taken there.

In separate condolence messages, they said that the nation will remember Hira’s contributions to the country’s drama field, including street drama movement.

They also prayed for the salvation of the departed soul and conveyed deep sympathy to the bereaved family.  According to his close aides, Hira had been suffering from cardiac related complications for years. Earlier, he was admitted to hospitals for several times and recovered. He was doing well in the recent months but he suddenly fell ill on Wednesday night in his Malibagh residence. Immediately he was taken to the hospital where on-duty doctors declared him dead.

Known as one of the most eminent dramatists of Bangladesh’s television and theatre arena, Hira also had made great contributions to the development of Pothnatok (street play) in the country.

He debuted on the silver screen as a director in the government-funded children’s film ‘Ekattorer Khudiram’ in 2014. He also directed two short films— ‘Gorom Bhater Golpo’ and ‘Ekattorer Rongpencil’.

Bangla Academy Award winner Hira was also a senior member of Aranyak Natya Dal.  Mannan Hira is survived by his wife and a son. His dead body was kept in front of the National Theatre Hall of Bangladesh Shilpakala Academy at 11:00am on Thursday where his colleagues, friends and well-wishers paid their last respects.

His first namaz-e-janaza was held at Segunbagicha Jam-e-Masjid at 12:00pm. He was buried at village home in Sirajganj after maghrib prayer.