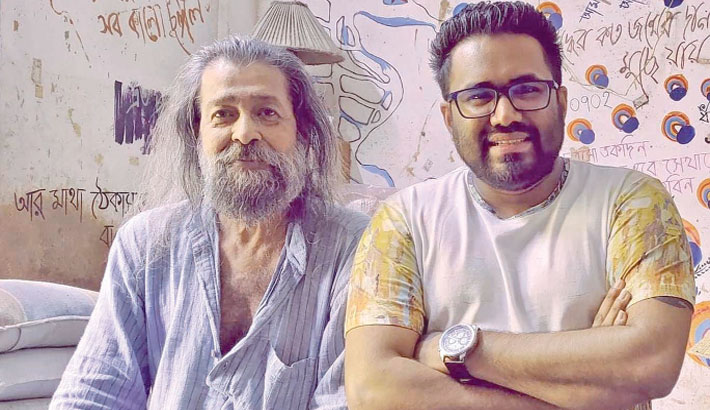 Tapas Bapi Das and A I Razu

Talented singer A I Razu’s new song ‘Shobdohin Shobdo’ will be released on his own YouTube channel (A I Razu Music) tomorrow. Tapas Bapi Das from Kolkata-based band ‘Moheener Ghoraguli’ has written and composed the song.

Talking about the song, Razu said, “Bapi Das has written the lyrics and composed the song with utmost care. While country’s popular singer, lyricist and composer Bappa Mazumder has arranged the music of this song. Popular Indian film-maker Samik Roy Choudhury has directed the music video for this number. Samik has also given a beautiful storyline to the song and blended with the current situation of the country.”

Bapi Das said, “I was amazed by Razu’s voice. One day when we were in an adda, Razu asked me to write and tune a romantic song for him. But I have never written a romantic lyric and it was not my type but when Razu asked me, I couldn’t say no to the talented singer.”

A I Razu is a versatile playback singer and solo artiste of the country. He won the Notun Kuri Tv Award (2005) in folk and patriotic song categories at the age of 9. He further enhanced himself under the tutelage of Ustad Sanjib Dey.  Focusing on classical and folk genres, Razu went on to pursue a diploma in music from the Bulbul Academy of Fine Arts (BAFA). A I Razu won the second position in the famed music competition Power Voice 2012, the biggest reality show in Bangladesh. This elevated his popularity to new heights.

He debuted in the Bangladeshi playback industry with the title song “Char Okhorer Bhalobasha” in 2013. Emon Shaha was the music director of the film.

He later voiced the track ‘Janina Kokhon’ in Munsur Ali’s “Shongram” (2013). His song ‘Eki Maya’ from the film ‘Desha: The Leader’ (2015) strikes a chord with the audience on gloomy romantic nights even today.

He is also working with the famed Indian Bengali composer and singer Rupam Islam. It will release early next year. Razu will share more about this song very soon with his listeners.