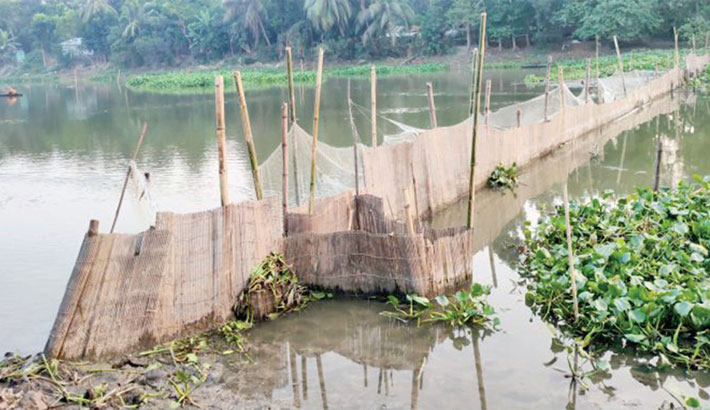 BENAPOLE: The normal flow of water is being disrupted due to numerous dams in the Chitra river for freely fishing in Bagharpara Upazila of Jashore district.

As a result, the river is losing its navigability and at the same time it is becoming fishless. Although this has been going on for a long time, no action has been taken by the administration. Bagharpara Upazila Fisheries Officer said, they are conducting regular eviction drive.

According to local sources, more than hundred gillnets were made in Babuipara, Singi, Gomrail, Nagar Chaprail, Ekotapur, Bonkhirdha, Shalikha, Mostobapur, Foraspur and Ishakhali areas in the middle of the river. The gillnets made with bamboo, and nets hamper the normal flow of the river and the fish cannot move easily, hampering breeding.

There are allegations that unscrupulous fishermen are carrying out these misdeeds due to the indifference of the Upazila Fisheries Department. An embankment has been constructed on the Chitra river 200 yards away from the Upazila Fisheries Office. The people on the banks of the river have questions about how they are fishing with a dam at the tip of its nose of administration is.  It has been alleged that some people in the fisheries office have close ties with these unscrupulous fishermen. Not only Upazila Sadar, but also different areas of Chitra river have such embankments.

Although fishing has been done in this manner for a long time, the upazila administration is not showing much activity. It is learned that the fishing festival has started from Khajura to Seemakhali Bridge, Beel Jaleshwar to Dhalgram Sluicegate in different places of Chitra river with innumerable embankments.

Fishing is prohibited by obstructing the normal flow of the river with a horizontal dam. In these dams, small reindeer fry of big fish are being killed.

It has been seen on the spot that a local has been fishing in the Chitra river illegally for a long time under the bridge of Bagharpara Upazila Sadar. From the bridge next to the Bagharpara Awami League office, a few glimpses were seen. In addition to the dam, fishing is being done in the river with current nets and illegal equipment. As a result, canals, beels and rivers are becoming fishless day by day.

Locals complained that due to lack of proper supervision by the Fisheries Department, some locals are fishing with their own dams. Even the fish sanctuary of Upazila Sadar is on the verge of extinction due to lack of supervision. Upazila Fisheries Officer Palash Bala said, “I am not aware of any obstruction in the river”. In that case, “action will be taken regarding not coming to the office regularly”, she said, the matter is not true.