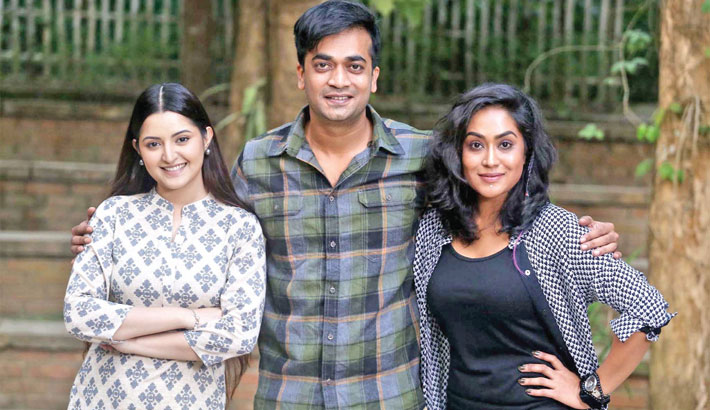 Noted actor and director Tauquir Ahmed is making the movie to mark the birth centenary of Father of the Nation Bangabandhu Sheikh Mujibur Rahman. Tauquir Ahmed himself has written the story, script and dialogue of the movie.

The shooting of the movie is underway at Tauquir’s own shooting house ‘Nokkhottrobari’ in Gazipur. National Film Award winning actress Jakia Bari Mamo and versatile actor Shamol Mawla started shooting for the movie on December 11while popular actress Pori Moni joined the shooting unit on December 17.

Mamo and Shamol are playing the roles of Irin and Partho respectively while Pori Moni is portraying the role of Diba in the film.

Talking about the film, Mamo said, “After a long 13-year hiatus I’m acting under the direction of Tauquir Bhai. It is no doubt Tauquir Bhai is a talented director. He is presenting our movies to the world. I’m playing the role of role Irin in the movie. Now my main task is to portray myself according to character in the movie.”

Shamol Mawla said, “I’ve wanted to work with Tauquir bhai for a long time. Finally, my dream came true.  The story of the film is also very nice. I hope audience will also like our work.”

Pori Moni said, “I’m very happy that I’m working under the direction of Tauquir bhai. Tauquir bhai is a talented director. In this, time my only duty is to complete the shooting properly.”

Tauquir Ahmed said, “It was initially scheduled to begin the filming in early months of this year which was postponed due to coronavirus pandemic. Finally, we have started the shooting. I’m very hopeful about the film.”