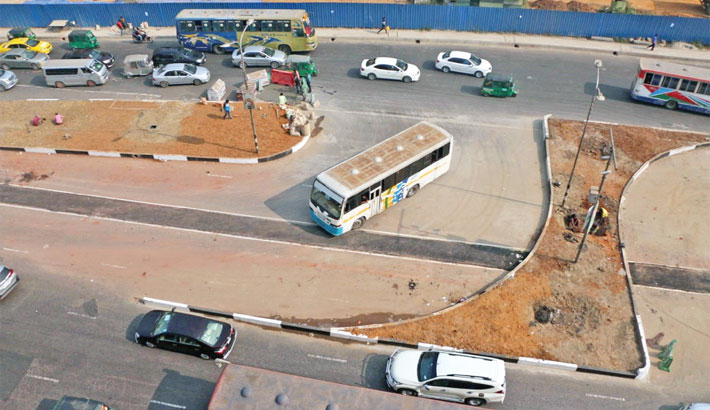 A public bus makes a U-turn after it was inaugurated in the capital’s Tejgaon area on Sunday. —SUN photo

One of the U-turns is located in front of BG Press of Tejgaon while two others are in Nabisco intersection and Banani Chairmanbari area, said a news release of DNCC.

With this, DNCC opened a total of six U-turns from Tejgaon to Abdullahpur under the 11 U-turns project which was taken by late mayor Annisul Huq in 2017.

Three other U-turns are located in front of Kawla Flying Academy, Uttara-1 RAB Office and Jashimuddin intersection of Uttara.

DNCC, however, cancelled the plan to construct a U-turn near Army Golf Club during the first revision of the project and the budget for the project also increased from 2.4 million to 3.1 million. The construction of remaining four U-turns is underway.

DNCC Mayor Atiqul Islam said that the U-turns will ease the sufferings of commuters caused by traffic jam.