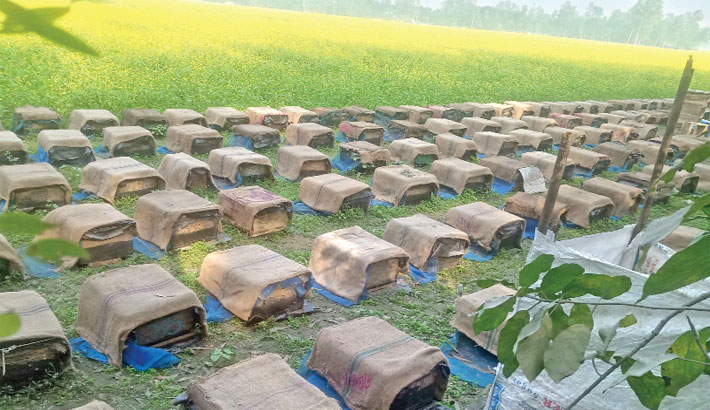 Beekeepers set their bee boxes beside a mustard field to collect honey from mustard flowers. The photo was taken from Kodalia village in Chauhali upazila of Sirajganj district on Saturday. — Sun Photo

SIRAJGANJ: Many beekeepers from different parts of the country have come to different villages of Chauhali upazila of Sirajganj district to collect honey from the mustard flower.

They have made temporary honey collecting farm setting up tent and placing several boxes next to the mustard field in different areas of Chowhali including Khashpukuria, Baghutia, Khashkaulia, Umarpur, Ghorjan, Sthal and Sadiachadpur area. The majority of bee keepers came from Satkhira and Faridpur District.

This year, more than three hundred bee farmers are working to amass 2 thousand tons of honey as target from mustard field throughout the district.

As the beekeepers are benefiting by collecting honey with bee farming in the patronization of the agriculture department, on the other hand, the farmers are getting more yield of mustard as a result of pollination of the bees.

Besides, being transparently self-reliant by turning the wheel of their fortunes by collecting honey with bees, hundreds of unemployed youths are making huge contributions to the economy of the country.

This year mustard seeds have been planted in 9,818 hectares of land in the upazila. Beekeeping makes 20% increase in mustard yield. On the same time beekeepers also able to collect more honey than previous year as more farmers of the area allowed beekeepers to set up their bee boxes beside their fields.

Mamun, Alim and Lablu, beekeepers from Satkhira, said, "We collect 3/5 kgs of honey from each box every week. I have 4 workers working with 180 bee boxes."

Abdur Rashid, president of the Sirajganj Bee Farming Cooperative Association, has been involved in bee cultivation for over 20 years.

He said to this reporter, "In this season I will collect about 7 tones of honey from my farm. Excluding all expenses, I will earn around 2 to 1 lakh taka selling it in local market. The collected high quality honey is being sold in wholesale market for taka 300-350.

According to the Agriculture Office sources, "about 30 thousand bee boxes have been installed in the district this year. We hope that this year Sirajganj district will be the first across the country to produce the highest honey."

Upazila Agriculture Officer, agriculturist Mohammad Jerin Ahmed said there is no bee farming locally in this upazila. All those who are producing honey with bee boxes are beekeepers from different parts of the country.

“I am trying to motivate the farmers to cultivate honey with their crops. Many people here are getting inspired after hearing about the success of beekeepers in different parts of the country and seeing bee farming,” he added.