‘Manorath’ shows how will power helps to overcome physical challenges 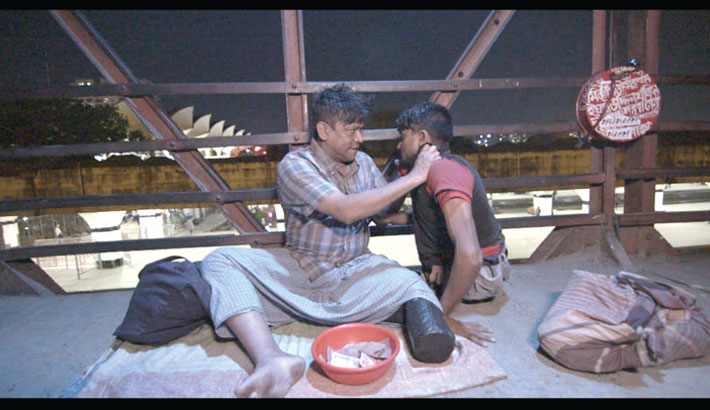 A scene from the film Manorath

Alam, a conductor of a city bus, has to move leaning on his hands and buttocks as his legs congenitally are out of order. Many others having physical and economic shortcomings are seen to beg alms sitting in different points or on the over bridges in Dhaka. It’s also heard that many city dawdlers do not get on the crowded public bus to avoid risks. But Alam is doing the hazardous job of a bus conductor conquering his physical shortcomings.

Mohammad Mufazzal, the director of the short film ‘Manorath’, came across Alam while he was collecting fares from the passengers of a city bus three years ago. Without digging his ground story, the director then thought about a fiction targeting the real life character Alam.

In the film ‘Manorath’, Alam initially was seen begging alms on an over bridge. Another beggar, whose role was played by actor Shatabdi Wadud, also sat in front of Alam to beg alms. At the end of the day, it was found that Shatabdi got more alms than that of Alam. Shatabdi was adept in drawing the attention of the passersby. He mourned with a different tone along with shaking his broken leg, covered by a plastic cover. But Alam looked at the legs of the passersby only. One day, he came know to that Shatabdi pretended like a lame person keeping his workable leg inside the plastic cover. After getting a life threat from the mighty Statabdi, he had to leave that place. He went to different hotels and shops leaning on arms and buttocks in search of woks. But he was revoked.

One day, the conductor of a city bus was absent during the scheduled trip. Then Alam was crossing that counter. As part of jokes, the counter manager proposed Alam to do the job of the bus conductor. He took the challenge and got onto the bus. Other staffs of the counter were in anxiety thinking about the miss management in the trip. Surprisingly, Alam handled the trip depending on his will force. He came back to the counter with a conquering smile and finally got the job of bus conductor.

What was about Statabdi who continued begging alms on the over bridge? Did he continue begging alms lastly? Was there any change in his mind following the instance of Alam?

The director of Manorath Mohammad Mufazzal said, “It seemed to me that Alam could be a perfect real life character for a visual story of conquering physical shortcomings for prestigious livelihood.”

“I never tried to know whether he begged alms before starting the job of the bus conductor. I engaged him in my film just to depict a story of conquering physical challenges.”

The other cast of the film including, Chandon Reza, Iqbal Hossain, Kabya and Samin.

Mithu Monir was in camera while Sameer Ahmed edited the film having a duration of 29 minutes.