‘Have to compromise on Test matches’ 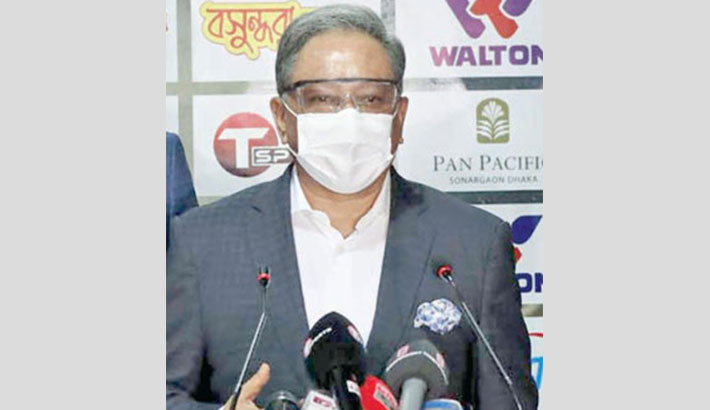 Bangladesh Cricket Board president Nazmul Hasan Papon said on Friday that in the new normal environment they have to compromise on the number of Test matches to accommodate other formats and ICC events.

Bangladesh got a reality check when West Indies insisted that they are not ready to play anything apart from games involving ICC Championship and the ICC World Cup League.

ICC Test championship suggests only two tests are required so the tourist agreed to play two Tests and similarly as the ODI’s series points are related with ICC World Cup League that prompted the tourist to take part in it and nothing more as they wanted to wrap the series as quickly as possible.

Initially it was planned that West Indies will play three Tests along with three ODI’s and two T20’s but in the new normal environment, both boards agreed to make it short.

Earlier, CWI’s two-member inspection team came to Bangladesh and expressed satisfaction with the Covid-19 management plan and security plan that paved way for the host to convince the tourist to visit their country.

Bangladesh were desperate to resume cricket in their own back yard after several series were postponed due to the corona pandemic.

Bangladesh had to cancel their tour of Pakistan in March and then their white-ball tour of Ireland in May as the COVID-19 situation worsened across the globe. That was followed by the postponement of the Sri Lanka tour, the two-match Test series against Australia and New Zealand.

Nazmul said that he is not sure whether they can play big Test series in the future considering the present scenario adding that they will have to compromise the longer-version game to accommodate other formats.

“It is difficult to say what will happen because only time can say about it (regarding the quantity of matches in a series),” Nazmul told reporters at Sher-e-Bangla National Stadium on Friday.

“Certainly it (number of game in bilateral series) might be reduced from what we were expecting but I don’t think it will be reduced drastically as the number of matches increased so I don’t think the quantity will be decreased substantially,” he said.

“But some Test matches might have to be reduced keeping the ICC event and all the Test ODI’s and T20’s. Because it takes a lot of time for Test and if that is curtailed, time for other formats can be accommodated,” he said.

“We have nothing to do as we have to compromise on it (playing a lesser number of Test matches),” he added.

Nazmul insisted that they are all set to sign a short term broadcast deal for the upcoming home series against West Indies as they have ended their six-year broadcast deal earlier in April.

“We will finalize it within a couple of days even if it is not for long term at least for this series,” he said.

While BCB successfully Bangabandhu Twenty20 Cup, an initiative from the Bangladesh Cricket Board to bring the players back into the fold after a long break, they are yet not ready to resume Dhaka Premier League.

The five-team T20 tournament is the second tournament staged by BCB during the COVID-19 pandemic after the fifty-over competition BCB President’s Cup in October.

“It is difficult to say whether we will take this initiative (of resuming domestic cricket). I want to take it at an appropriate time and it all depends on whether we can manage it. So far we have the Windies series in mind,” said Nazmul.

“Since the Windies series will be here, everything has to be done with that in mind. Nothing can be done from an angle where one of our players is infected or something that will give a negative impression to the outside. So whatever we do has to be done very carefully. And the next thing is that our tour is starting. Personally I think very soon, everything is going to get better in the next couple of months. If it gets better then we can definitely start,” he concluded about DPL that was stopped after the first round for corona.