Wild elephants must be saved 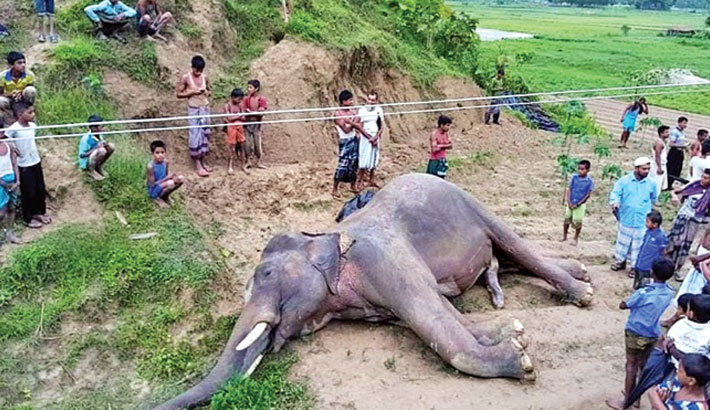 Three wild elephants were killed in Cox's Bazar last November alone. Illegal occupiers of government forests have become one of the enemies of elephants. Behind the scene, there is a gang of ivory and bone smugglers. Environmentalists have expressed concern over the killing of one elephant after another in Cox's Bazar. Asian elephants are listed as endangered by the International Union for Conservation of Forests (IUCN). Rashedul Majid, chief executive of Environment People, an environmental organisation in Cox's Bazar, said that two-thirds of the 268 most endangered Asian elephants in the country live in the Cox's Bazar and Chattogram Hill Tracts.

In Chattogram, Cox's Bazar and the Chattogram Hill Tracts, wild elephants are called 'Ecosystem Pillars'. But day by day the habitat is declining and the largest wildlife in the land is endangered by human attacks. Scientists fear that if these "key-stone species" (areas where elephants live) are lost from the environment, many more species of plants and animals will become extinct. According to wildlife experts, elephants have four main services in the environment. One of these is as a seed transporter. Elephant feces are full of plant seeds. They spread seeds from one place to another by taking food in one place and defecating in another place. According to the survey, a wild elephant can spread seeds up to a distance of about 50 km. Researchers say that some species rely entirely on elephants to propagate their seeds.

Recently, one after another wild elephants have been killed in the protected forests of South Chattogram and Cox's Bazar. In the last two years, 13 wild elephants have died abnormally. In order to protect the wild elephants and restore their home range, the illegal settlements and brickfields that have been created by clearing the currently protected forests have to be eradicated. At the same time, it is necessary to identify the habitats of wild elephants and ensure adequate food, security and breeding facilities there. For this, the concerned departments including the forest department have to take concerted initiative on an urgent basis.

The crisis of habitat, food and security has been linked to the activities of poachers. Elephants are the largest land animals in the crisis. Environmentalists claim that this is due to habitat destruction, unplanned development, Rohingya population and sanctuary destruction. Officials of environmental organisations have expressed concern about this. They say the elephants' habitat has been destroyed, the corridors have been severely disrupted and the elephants are in a food crisis. A herd of wild elephants almost invaded the locality. Besides, a class of miscreants are shooting and killing the elephants.

Our wild elephant habitat extends from Cox's Bazar to Chattogram Hill Tracts and Chattogram to Moulvibazar and Jamalpur in Sylhet. But due to the recent deforestation and food crisis, conflicts are being created between wild elephants and humans. The wild elephants in the Cox's Bazar area are captive in certain areas. As many as 22 elephant corridors have been closed so far due to unplanned railway lines and Rohingya settlements. Even in the deep forests people have settled with illegal occupation. So, the elephants are attacking the locality in search of food and they are being killed with electric shocks and gun shots to protect the crops.

Cox's Bazar North Forest Department DFO Md. Touhidul Islam highlighted the picture of 280 people being killed in the mountains in the last few years due to elephant attacks. According to him, the hill people have been living in the hills since ancient times where wild elephants also live. But in the last few years, the statistics of the death toll from elephant attacks show that only four hill people have died while the remaining 276 dead were Bengalis. The hill people know where the elephants live and which way they travel. That is why the number of deaths of hill people is negligible. The death toll of the Bengali people is high who have settled in the protected forest land by occupying the elephant habitat and movement areas.

The government should take effective steps to protect endangered Asian elephants, including creating safe havens, overcoming their food crisis, keeping elephant movement corridors safe and uninterrupted, quickly identifying those involved in elephant poaching and bringing them under the law, creating awareness among the people. Otherwise, wild elephants will become extinct day by day due to human cruelty. Habitats of these elephants and wild animals are being destroyed due to various man-made causes including cutting down hills. The Department of Environment should work to protect wildlife sanctuaries or habitats, including the prevention of deforestation.

Elephants can be an important means of transporting natural resources in remote mountainous areas of the country. There is also income from tourism through elephant conservation. But the extinction of elephants will have a negative impact on the climate, environment and nature of the region. In order to save the elephants, the government has to take the right action plan. Awareness among the people should be raised so that these elephants are not killed and the people come forward for elephant conservation. Besides, strict legal action should be taken against elephant killers.