Unmanned railway crossing blamed for the accident in Joypurhat 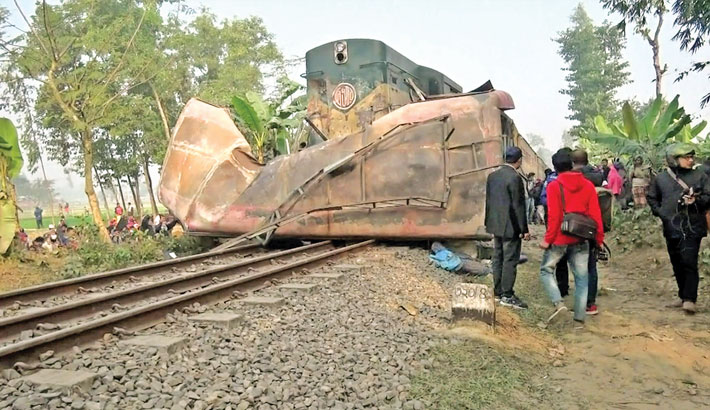 A train smashes into a passenger bus at Puranapail rail gate in Sadar upazila of Joypurhat and drags the bus nearly half a kilometre away along the rail line on Saturday morning, killing at least 12 people. —sun photo

At least 12 people were killed and eight others injured as a train rammed into a passenger bus at Puranapail railway crossing in Sadar Upazila of Joypurhat on Saturday morning, cutting off train communications between the northern region and other parts of the country for seven hours.

“The train dragged the bus away to about half a kilometre along the rail line,” a witness said, adding that all the victims are the passengers of the bus.

Sirajul Islam, an officer of the Fire Service and Civil Defence, said 10 passengers of the bus died on the spot and two others succumbed to their injuries in Shaheed Ziaur Rahman Medical College Hospital (SZMC) in Bagura.

Firefighters from Joypurhat and Panchbibi Fire Stations rushed to the spot and conducted a rescue operation. The bodies were sent to the SZMC morgue.

Hearing the news of the accident, Deputy Commissioner Md Shariful Islam and Superintendent of Police Md Salam Kabir along with fire service officers rushed to the scene.

The DC told reporters that the tragic accident took place around 7:00am because of the gateman’s negligence of duties.

“We’ve come to know that the gateman did not perform his duties,” he added.

He also said the district administration will bear the costs of the burials of the deceased.

Nasir Uddin, a divisional transport officer of the railway, said train communications on the route resumed around 2:00pm.

The DC further said they formed a three-member investigation committee headed by Additional District Magistrate Mohammad Reza Hasan. The committee has been asked to submit its findings within three working days.

The committees have been asked to submit their report as soon as possible.

According to the data provided by Bangladesh Railway in August last year, there are 1,412 level-crossings across the country. Only 466 gates have gatekeepers.

At least 113 people have been killed in accidents on the railway in a period between January 1 and June 30 this year, says a report jointly prepared by Green Club of Bangladesh (GCB) and the National Committee to Protect Shipping, Roads and Railways (NCPSRR).