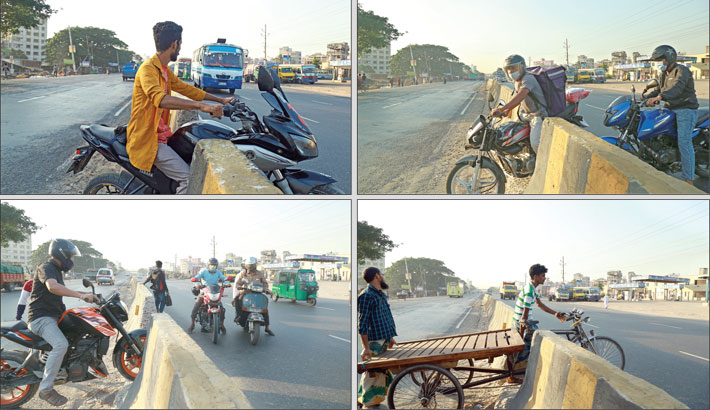 Bikers and a rickshaw-van puller take a turn in violation of traffic rules through the broken part of road divider on Dhaka-Chattogram highway at Matuail in the capital, risking their lives and slowing down traffic on the highway. The photo was taken on Friday. —reyad hossain

Pedestrians, motorbikes and other vehicles often cross roads and highways with recklessly abandon in the capital and elsewhere in the country, resulting in frequent road accidents.

Violation of traffic rules by pedestrians and transport workers is a common phenomenon on city streets.

Road dividers have been erected on different roads and highways to avert accidents, but many break traffic rules by crossing busy roads recklessly.

Besides this, rickshaw-van-pullers are often seen ferrying their three-wheelers over road dividers on busy thoroughfares in the capital.

Joint Commissioner (traffic) of Dhaka Metropolitan Police (DMP) Bashudeb Banik told the Daily Sun that they were not aware of such indiscriminate road crossings by motor vehicles and slow-moving rickshaws in the capital.

“We’re working hard to bring the city traffic jams under control. “Stern actions, including filing cases and seizing vehicles, would be taken if any traffic rules violator is found,” he warned.

In many areas in the capital and on its outskirts, it was found that pedestrians hardly use footbridges. They cross the roads with reckless abandon, risking their lives.

These footbridges were installed with a view to ensuring safe road crossing and eliminating fear of road accidents.

There are specific laws in the country to prevent people from crossing roads without negotiating footbridges, but very seldom law enforcers are found to enforce it.

“We should simply realise that if we use footbridges, we can avoid accidents.”

On busy Mirpur Road at Nilkhet, Dhaka South City Corporation has set up two footbridges within 200 yards for pedestrians, but these facilities are hardly used.

The DSCC has even install fences under footbridges on road dividers so that people are compelled to use them, but errant jaywalkers are often seen to cross the road, making their way out through the fence just below the footbridges.

A similar scene is seen in the capital that pedestrians cross the road where there is no zebra-crossing and they even talk over phone.

Not only barbed wire fence, jaywalkers do not bother about five-foot high boundary walls set at different busy points of the highways.

Avoiding footbridge over Dhaka-Aricha Highway at Hemayetpur in Savar, people are seen to cross the busy highway jumping over two five-foot high dividers installed by the Roads and Highway Department to stop jaywalking.

Meanwhile, frustrated pedestrians alleged that most of the footpaths in Dhaka city are not pedestrian friendly as they are dilapidated and most often blocked with construction materials and hawkers. Some of the footbridges are also not covered and they a pose security threat.

“It is very difficult to cross the busy city roads as zebra crossings are absent from many roads,” said a passer-by.

Such traffic rules are also being violated in many other parts of the capital, including Mohakhali, Moghbazar and Khilgaon lever-crossings.

It is not all about vehicles violating traffic rules. It is also the passersby on the city roads and even on the highways giving ignoring traffic law.