Now they vandalise sculpture of Bagha Jatin in Kushtia 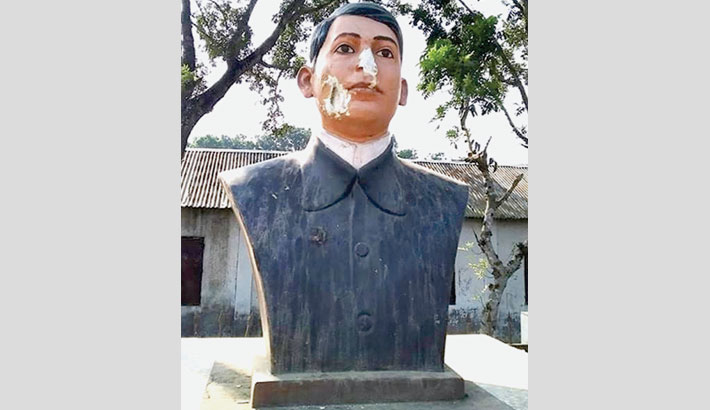 Only two weeks after the vandalism of the sculpture of Bangabandhu Sheikh Mujibur Rahman, miscreants defaced the sculpture of anti-British revolutionary leader Jatindranath Mukherjee, popularly known as Bagha Jatin, in Kushtia on Friday.

Police sources said the sculpture of Bagha Jatin located on the campus of Koya College in Kumarkhali upazila of the district was vandalised in the early hours of Friday.

Koya College Principal Harun Ar Rashid said, “The college is now closed. No student is in the campus. I came to know about the incident when local people informed me over phone.”

Miscreants smashed the nose and some parts of the right cheek of the sculpture, Kumarkhali Upazila Nirbahi Officer (UNO) Razibul Islam Khan, said after his visit to the spot

Mojibur Rahman, Officer-in-Charge of Kumarkhali Police Station, said after hearing about the incident, a police team rushed to the spot. “We are now investigating the matter,” he added.

The Detective Branch of police has already launched a drive in the area to arrest those involved in the incident, police sources said.

Police detained four people, including the chairman of the college governing body, and the college principal and two others over the incident. They were released after questioning.

Later, the college principal filed a case with the local police station in connection with the vandalism of the sculpture.

Bagha Jatin was one of the most renowned revolutionary freedom fighters who had stormed the British rule in India.

He obtained the epithet ‘Bagha’ in 1906 after he alone killed a Royal Bengal Tiger with a dagger after fighting with it for nearly three hours.

He created a ‘network of secret society’ to train dedicated youths for the revolution against the British and consequently became the commander-in-chief of that group which later turned into the most famous revolutionary group Jugantor.

When the whole Indian sub continent was silent amid people’s discontent against the British Raj, Jatin declared “Amra morbo, jagat jagbe” (We shall die to awaken the nation).

Thousands of young revolutionaries joined his brand of freedom movement.

Before the World War I, Jatin met the German Crown Prince in Kolkata and convinced him to supply arms for an insurrection to create a socialist government in India.

On September 10, 1915, the 36-year-old revolutionary leader succumbed to bullet injuries at a Balasore hospital following a battle with the British.

Bagha Jatin was born on December 7, 1879 at Koya village.

Kumarkhali upazila administration built the sculpture to remember him at his birth place. The sculpture was inaugurated on December 6, 2016.

Earlier, an under-construction sculpture of Bangabandhu Sheikh Mujibur Rahman was vandalised in Kushtia on December 5.

They said as per the constitution, the state will protect the historically important things and establishments, including sculptures, but the government has failed to do so.

A group of Hefazat-e-Islam and Khelafat Majlish, backed by BNP and Jamaat-e-Islami, has been trying to make Bangladesh a state like Mullah Omar’s Afghanistan or Zia-ul-Haq’s Pakistan, the committee said.

They also warned that if the government compromises with them it will bring a disaster for the nation.