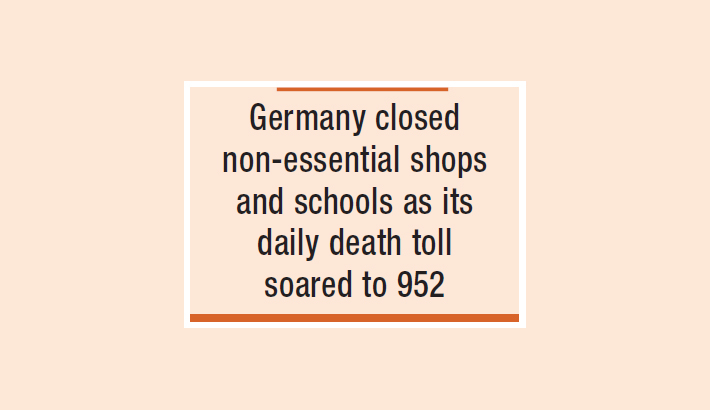 BERLIN: Several European countries tightened restrictions on Wednesday, as Germany set a record for daily deaths and the United States broke its own daily high for infection numbers, reports AFP.

The tougher measures came as EU countries agreed to rollout vaccinations on the same day.

“To get to the end of the pandemic, we will need up to 70 percent of the population vaccinated,” European Commission chief Ursula von der Leyen told MEPs.

Pressure has been mounting on the bloc since Britain and the United States both started their programmes, using a vaccine developed in the EU by Pfizer and BioNTech.

Germany, which dealt with its first wave relatively smoothly, closed non-essential shops and schools on Wednesday as its daily death toll soared to 952. The country has struggled to contain a surge in recent months and has joined calls for the European Union’s health regulator to approve the Pfizer-BioNTech vaccine “before Christmas”. China is also looking to stock up on the Pfizer vaccine with one company agreeing to buy 100 million doses subject to local approval—the country is mixing its vaccination strategy between locally developed drugs and imported ones.

Britain’s government said on Wednesday it had delivered the first jabs to 137,000 people, but high infection numbers still forced London to join large parts of England under tough restrictions on Wednesday.

Pubs, bars, restaurants and other hospitality sites will close, as will theatres and other entertainment venues.

“The hospitality business needs this week, and it’s devastating. It is devastatingly awful,” said Lesley Lewis, owner of The French House, a London pub.

“But if this is what it takes to save lives, that’s what we have to do.”

Denmark, France, Turkey and the Netherlands have all tightened their coronavirus restrictions and Spain’s prime minister expressed alarm at rising infection numbers there.

Hopes for an end to the pandemic have been boosted by positive assessments of the Moderna Covid-19 vaccine. The US Food and Drug Administration on Tuesday issued an upbeat briefing about Moderna ahead of a meeting of experts on whether to grant it emergency approval.

The United States has already started using the Pfizer-BioNTech vaccine and on Tuesday the FDA also approved the country’s first rapid at-home test for Covid-19.

The United States remains the hardest-hit nation, setting a record for new daily infections on Tuesday with more than 248,000 cases.