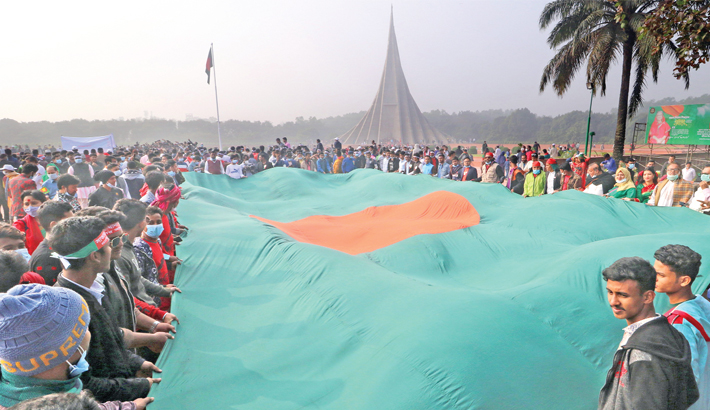 People from all walks of life throng the National Memorial at Savar in Dhaka to pay homage the martyrs of the Liberation War, marking Victory Day on Wednesday. – Md nasir uddin

The nation celebrated the 50th Victory Day on Wednesday with a renewed vow to wipe out the communal forces from the soil of Bangladesh, which was freed from the clutches of the Pakistani occupation forces with the supreme sacrifices of 3 million people and at the cost of chastity of 0.2 million women.

People from all walks of life came up with the pledge while paying homage to the Liberation War martyrs at the National Mausoleum at Savar on the outskirts of the capital and elsewhere across the country.

If the anti-liberation elements and their cohorts are not uprooted, they will become a threat for Bangladesh’s progress in future, they noted.

Expressing his resentment at the activities of the defeated forces of 1971, a Dhaka University student stressed the need for rooting out the communal forces from the soil of Bangladesh to avert any challenge from them in future.

“The defeated forces are still hatching conspiracies against the country. But, we, the youth, will continue our fight against those forces. We’ll put our highest efforts to build the country imbued with the spirit of independence,” said Zobayer Hasan.

President Abdul Hamid and Prime Minister Sheikh Hasina led the nation in paying homage to the martyred freedom fighters in the morning.

On behalf of the President, his military secretary SM Shamim-uz-Zaman laid a wreath at the altar of the National Mausoleum with the rise of the sun at 6:34am.

On behalf of the Prime Minister, her Military Secretary Major General Naqib Ahmed Chowdhury placed the floral wreath at the altar of the memorial at the same time.

After placing the wreaths, they stood there in solemn silence for a while as a mark of profound respects to the memories of the martyrs of the Great War of Liberation in 1971.

Usually, the President and the Prime Minister place wreaths at the memorial in person every year.

However, they avoided going there this time due to the coronavirus pandemic as the Victory Day was celebrated in a scaled-back manner.

After the VIPs, the memorial was opened for all. People then started thronging the memorial to pay homage to the martyrs.

During the celebrations at home and abroad, the red-green flag, which was achieved after a nine-month war, was hoisted everywhere.

People from all walks of life with the national flag in their hands paid tributes to the best sons of the soil who laid down their lives to free their motherland from the clutches of Pakistan.

They also called upon the government to free the country from Razakars, fundamentalists and militants and build it with the spirit of independence.

On December 16, 1971, Pakistan occupation forces surrendered at the historic Racecourse Maidan (now Suhrawardy Udyan), leading to the birth of Bangladesh.

The day was heralded by a 31-gun salute at dawn while all roads led to the National Mausoleum, marking the 50th Victory Day.

The day was a public holiday. The national flag was hoisted atop all public and private buildings across the country.

Newspapers published special supplements while radio and television channels aired special programmes highlighting the significance of the day in the national life.

Special prayers were offered at mosques, temples, churches, pagodas and other places of worship, seeking divine blessings for peace and progress of the country.

The destitute children were allowed to visit Shishu Park in the capital on the day free of cost while improved diet was served in jails, hospitals, orphanages and vagrant homes across the country.

Main thoroughfares and road islands in the capital were decorated with the miniature national flag while important government buildings were illuminated.