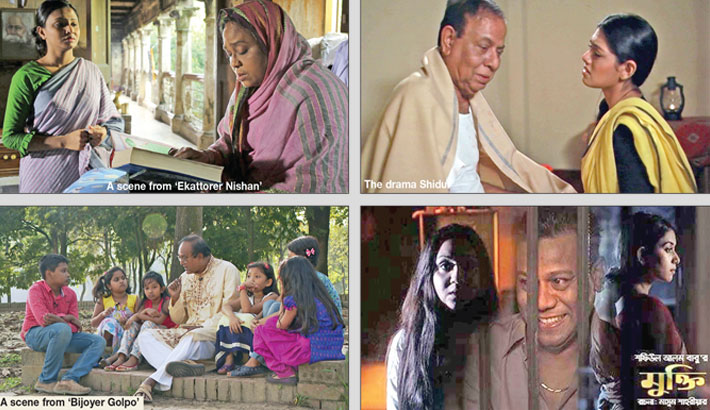 The nation is all set to celebrate the 50th Victory Day today. Cultural organisations of the country also have chalked out a series of programmes to mark the day.

Bangla Academy will begin its celebration programme by placing a wreath at the National Memorial in Savar this morning.

The academy will also hold a discussion at its Abdul Karim Sahitya Bisharad auditorium at   11:00am tomorrow. Lawmaker Ashim Kumar Ukil and cultural personality Nasiruddin Yousuff will attend the programme as discussants. Bangla Academy Director General Habibullah Siraji will deliver welcome address on the occasion with its Chairman Professor Shamsuzzaman Khan in the chair.

Besides, Shilpakala Academy will also hold a discussion and cultural programme at its National Theatre Hall at 04:00pm today.

Besides, local satellite television channels and radio stations will air an array of quality programmes to celebrate the Victory Day.

Channel i, one of the leading satellite television channels of the country, will air ‘Oikko Virtual Bijoy Mela’ live on its premises from 11:05am. The channel will also telecast feature films, plays and movies based on the Liberation War on the occasion. Bangla movie ‘Ekattorer Nishan’ will be aired at 03:05pm today. Written by Farzana Afrin Rupa and directed by Taher Shipon, the film stars Fazlur Rahman Babu, Wahida Mollick Joly, Shahadat Hossain, Munira Mithu, Kochi Khandakar, Sera Zaman and others.

A special drama ‘Rayot Lata’ will be aired on the channel at 09:30pm. Zakia Bari Mamo, Intekhab Dinar, Shilpi Sharkar Apu, Shohel Khan are the lead cast of the drama.

A Victory Day special drama ‘Sidur’ will be aired on Boishakhi TV at 11:00pm. The play stars Nusrat Imrose Tisha, Shajal Noor and others.