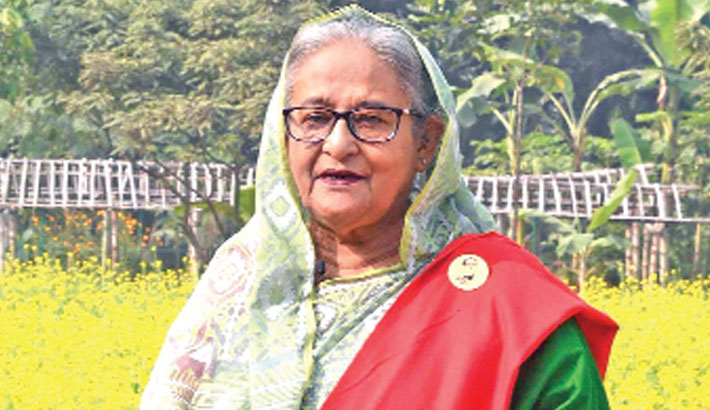 Prime Minister Sheikh Hasina on Tuesday cautioned the countrymen against the reappearance of fanaticism in her Victory Day speech, saying her government was determined to prevent any attempt to use religion as a “political weapon” to create social unrests, reports BSS.

“Don’t use religion as a political tool . . . we will not allow anyone to create any anarchy or division in this country in the name of religion,” she said in her nationwide televised address.

Sheikh Hasina said a section of defeated forces of 1971 reappeared in the political landscape to mislead ordinary pious Muslims with concocted and confusing messages to create social unrests to return the country to a situation which the nation overcame 50 years ago.

She said being patronized by a political quarter, these elements even dared to show their red eyes to the government though Father of the Nation Bangabandhu Sheikh Mujibur Rahman had warned the nation against the use of religion as a political weapon many decades ago.

“The people of Bangladesh are pious, not religious bigots . . . the people of this country will proceed towards progress, advancement and development upholding the religious values,” the premier said in an apparent reference of a recently launched move by a quarter against sculpture.

She added: “Let us not trample the Liberation War’s spirit of non-communalism . . . let us not forget our debt to tens of thousands of martyrs.”

The premier reminded all that the country’s independence came in exchange of bloods of the followers of all faiths — Muslims, Hindus, Buddhists and Christians and added that Bangladesh still carried the heritage of liberal spirituality, culture and pluralism.

She particularly urged the youths and new generations to uphold the this spirit and not forget the “sacrifices of your forefathers”.

Referring to the COVID-19 pandemic, the prime minister said not only Bangladesh, the entire world has been suffering due to the lethal disease which has put a huge negative impact on health management alongside the economy.

Pointing out that economy of many developed and emerging countries has registered a negative growth in the wake of coronavirus outbreak, she said Bangladesh has been able to tackle its negative impact by taking timely and appropriate measures.

“We’ve have set an example in the world with tackling the coronavirus pandemic in unison,” she said”

Sheikh Hasina said the government has declared a set of stimulus packages worth Taka 1,21,000 crore which are 4.3 percent of the GDP.

Besides, she said, cash incentive has also been given to 2.5 crore marginal people of different professions, while remittance, agriculture production and export earnings have rebounded overcoming the primary setback caused by the COVID-19.

“Our foreign currency reserve has exceeded US$ 41 billon despite the pandemic,” she added. 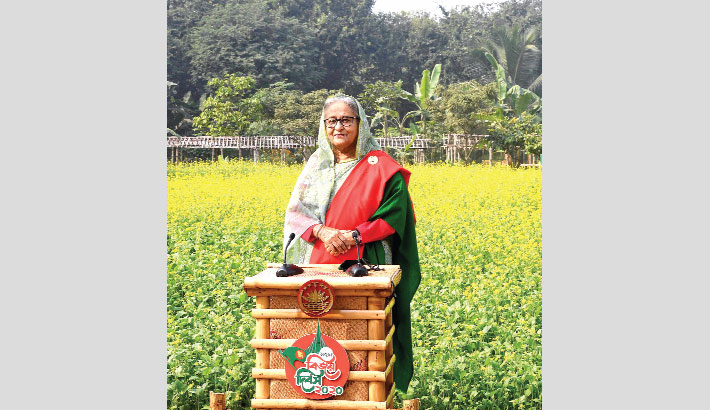 Mentioning that country’s GDP growth has registered 5.24 percent in the last fiscal, the premier said several international organizations have forecast that Bangladesh’s economic growth in 2020 would be the highest in South Asia.

Sheikh Hasina said development work of different mega projects has been going on in full swing, and all the spans of the Padma Bridge, the dream and pride project of country’s people, have already been installed.

Apart from it, the work of metro rail in Dhaka is progressing fast, while Rooppur Nuclear Power Plant did not witness a single day work closure and construction work of Matarbari Power Plant in Cox’s Bazar, tunnel under Karnaphuli river in Chattogram as well as four-lane of country’s highways is going speedily, she continued.

The prime minister said the birth centenary of Father of the Nation Bangabandhu Sheikh Mujibur Rahman is being celebrated on a limited scale due to the COVID-19 pandemic.

“We’ll celebrate the 50th anniversary of our independence next year, and if the coronavirus pandemic goes away, the Golden Jubilee of our independence will be celebrated with due enthusiasm and jubilation alongside the programmes marking the birth centenary of the Father of the Nation,” she added.

Mentioning that Bangabandhu used to say that none will show respect to a nation of beggar, the prime minister said, “We’ve have come out of the image by putting Bangladesh at a dignified position on the world stage.”

Referring to the attainment of all criteria to step into the list of developing countries from the least developed ones, the premier said “We’re on the edge of materializing the dream of the Father of the Nation to turn Bangladesh into a hunger-and-poverty-free as well as non-communal ‘Sonar Bangla’.”

She went on saying, “We’ve to keep up the development spree, and then our dream of becoming developed and prosperous country by 2041 will be fulfilled.”

The Prime Minister said the collaborators of the defeated forces brutally killed the Father of the Nation along with most of his family members on August 15, 1975 when he had got busy to rebuild the war-torn country and was working rigorously day-night to improve the lot of country’s people.

“Only a person Mujib departed the earth through the killing of Bangabandhu, rather the emergence of Bangladesh in the world was made questionable through the assassination of the Father of the Nation and invincible progress in cultural, social and economic sectors of Bangali nation was stopped,” she noted.

She said: “An ideology and dream was killed with the murder of Bangabandhu with whom fortunes of millions of hard-working mass people were involved.”

Sheikh Hasina said the Father of the Nation was a genuine Muslim and he used to practice all religious rituals.

Like Bangabandhu, nobody else could understand the mentality-thinking-desire of Bangla’s people, she said, adding: “That is why when he wrote the constitution, the four main principals – Bangali nationalism, secularism, democracy and socialism – of governing the state were adopted reflecting the expectation and wish of people.”

But, the matter of sorrow was that the anti-liberation governments after 1975 took measures to perpetuate their position by demolishing the values attained through the War of Liberation, she said, adding they also tried to stigmatize Awami League and members of Bangabandhu family by distorting history through continuous rumors and propaganda with state sponsorship.

The Prime Minister said what the secular Bangabandhu did for spreading and protecting the Islamic values, the governments camouflaged in the name of Islam did not do that.

“Banning liquor-gambling-horse race through enacting law and establishing Islamic Foundation and Madrasa Board as well as becoming OIC member were done by the Bangabandhu within three years and six months after the independence,” she said.

The premier also briefly highlighted her government’s work on the expansion of Islamic education such as establishment of Islami Arabic University, introduction of honors courses at 80 madrasas, recognizing Qawmi Madrasah and its Qawmi degree equivalent to master’s status, construction of good-looking mosque at district and upazila levels, mosque-based libraries across the country under Islamic Foundation, formation of welfare trust for providing assistance to Imam-Muazzin and employment of over thousands of Islamic scholars (Alem- Olamaye Keram).

“What my government has done in spreading Islamic education in the country, no other governments did it in the past,” she added.