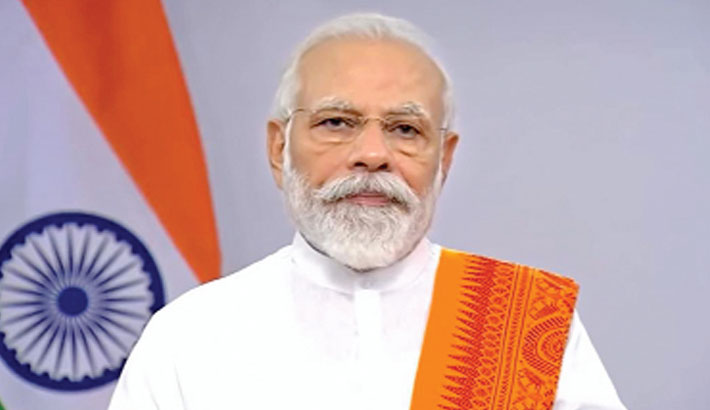 KUTCH: Indian Prime Minister Narendra Modi expressed support yet again for his government’s controversial farm sector laws that has had protesting farmers camping at the borders of Delhi for nearly 20 days, reports NDTV.

The government has made it clear that would not scrap the farm laws, which is the principal demand of the farmers, resulting in a deadlock and escalation of protests. “The agriculture reforms that have taken place are exactly what farmer bodies and even opposition parties have been asking over the years,” the Prime Minister said on Tuesday, reiterating the government’s claim that the opposition is now “instigating” and “misleading” the farmers.

“The Government of India is always committed to farmers’ welfare and we will keep assuring the farmers and addressing their concerns,” he added while speaking at a function in Gujarat’s Kutch. Modi had marked the government’s line last month in his monthly radio address Mann ki Baat, expressing support for the laws three days after the farmers started their “Delhi Chalo” protest.

Since then, the government had held several rounds of talks with the farmers, one was even attended by Union Home Minister Amit Shah. But no resolution has been in sight with the farmers rejecting the government’s offer of bringing amendments in the laws. Last week, the BJP had claimed that the Congress was contradicting its own plans to incite farmers and oppose the government. During the UPA rule, the Congress and Sharad Pawar’s Nationalist Congress Party supported what are now key provisions of the farm laws, the party said.

Union minister Ravi Shankar Prasad said repeal of the APMC Act was part of the 2019 manifesto of the Congress and the party had promised to get it done within six months. Contract farming had also started during the Manmohan Singh government in many Congress states, the minister said.

Former Haryana Chief Minister Bhupinder Singh Hooda, who headed the committees that made these recommendations, had offered clarification.

The Congress, Mr Hooda had said,  had always supported the farmers and had geared its policy towards offering farmers the Minimum Support Price guaranteed by the government, which has no place in the NDA’s new farm laws.