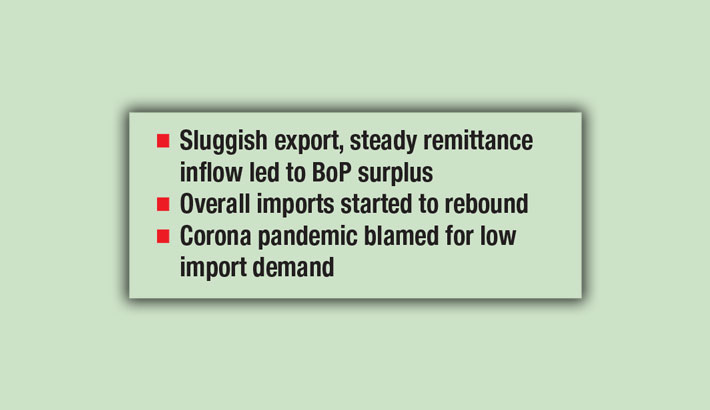 The country’s overall Balance of Payments (BoP) has marked a record surplus at over $4.1 billion during the July-October period as capital machinery and other import demand dropped amid the Covid-19 pandemic.

Economists attributed the surplus BoP to a slow pace in financial activities amid the Covid-19 pandemic. A steady inflow of remittance and a rise in external fund flows also contributed to the surplus, they noted.

Dr. Ahsan H. Mansur, executive director at the Policy Research Institute of Bangladesh (PRI), said, "This is mainly because of slow import".

A BoP surplus means Bangladesh received much more than it spent for the overseas parties, leading to its liquidity buffer, he said.

Bangladesh’s imports fell by nearly 12 per cent during the period compared to the corresponding period a year back.

Dr. Mansur, who once served at the International Monetary Fund (IMF), said there were many other reasons, such as the remittance inflow, behind the BoP surplus.

According to the central bank data, the BoP position reflects a record high final gross international reserve or foreign exchange reserve level of $40 billion-plus in this October.

At this level, Bangladesh Bank has an ample external liquidity buffer, which can cushion the domestic economy against external shocks.

"It's a good sign for our economy," a senior official of the Bangladesh Bank said while explaining the rising trend in imports.

Higher imports indicate that the country's economy is returning to normalcy, the official added.

Opening of letters of credit (LCs), generally known as import orders, jumped by nearly 54 per cent to $4.43 billion in September 2020 from $2.88 billion a month ago, according to the central bank's latest data.

On the other hand, the settlement of LCs, generally known as actual import, in terms of value, rose by more than 18 per cent to $3.71 billion in September from $3.13 billion in the previous month.

He expressed fears that Bangladesh's foreign trade covering both export and import might be hampered if the rising trend of infection by Covid-19 is continuing in the United States and the European Union (EU) member countries.

Actual imports through back-to-back LCs of ready-made garment (RMG) products increased by nearly 26 per cent to $505.71 million in September from $401.73 million a month ago, according to BB data.