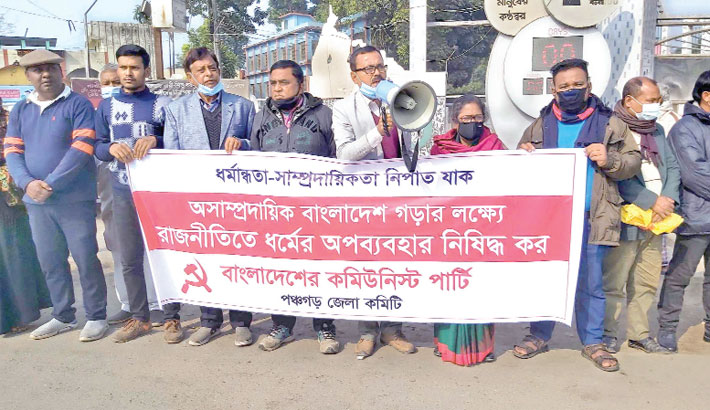 Leaders and activists of CPB’s Panchagarh district unit on Saturday form a human chain in front of the central Shaheed Minar of the district protesting the vandalism of the sculpture of Father of the Nation Bangabandhu Sheikh Mujibur Rahman in Kushtia. — Sun Photo

Widespread protests against the vandalism of Bangabandhu’s sculpture in Kushtia are being continued in different districts of the country. People are demanding exemplary punishment of vandals.

The mayor came up with this observation while addressing a human chain in city’s Picture Palace intersection area as the chief guest, organised by Khulna Union of Journalists (KUJ).

He said the country achieved the independence with the blood of Hindus, Muslims, Buddhists and Christians and Bangladesh was created for establishing a non-communal state through demolishing communal state system. No one will be allowed to spread communal poison here, Khaleque said.

In Netrakona, district administration and other governments offices held protest rally in the morning on Saturday against the vandalism of an under-construction sculpture of Bangabandhu Sheikh Mujibur Rahman in Kushtia.

In Kurigram, Bhurungamari Upazila administration of the district on Saturday formed human chain protesting the vandalism of an under-construction sculpture of Bangabandhu Sheikh Mujibur Rahman in Kushtia.