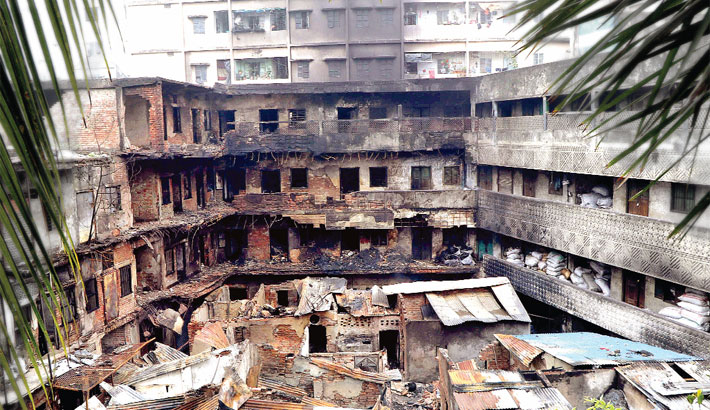 Scorched-black walls, burnt-out pillars and roofs of the four-storey ‘Noakhali Building’ on Urdu Road in the Old Dhaka’s Chawkbazar area after the fire that broke out on early Friday. —Md Nasir Uddin

A fire broke out at a plastic goods manufacturing factory in the Old Dhaka’s Chawkbazar area on Friday early hours.

The fire originated at a four-storey abandoned ‘Noakhali Building’ on Urdu Road at around 3:45am.

At least 25 to 30 stores of raw materials for plastic products in the building were destroyed in the fire.

On receiving information, 15 firefighting units from different fire stations, including Fulbaria headquarters, rushed to the spot and douse the flame after two hours of frantic efforts.

Kamrul Hasan, duty officer of the fire service's control room, said 15 firefighting units eventually took control of the situation despite difficulties due to narrow alleyways in the neighbourhood.

However, no casualty was reported in the incident so far.

Moudut Hawladar, officer-in-charge of Chawkbazar Police Station, suspects that an electrical short-circuit might have sparked off the fire.