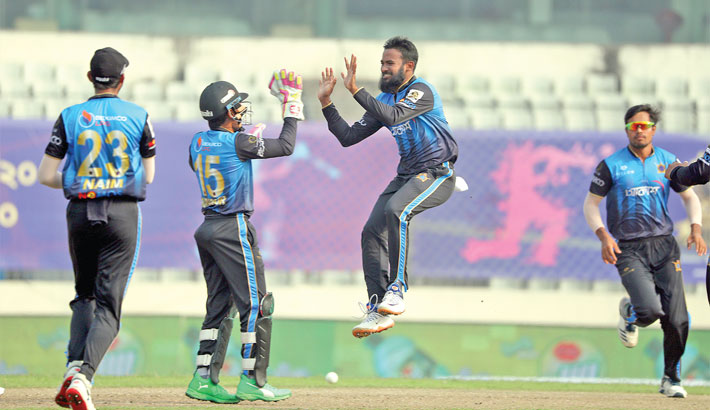 Beximco Dhaka earned a spot in the play-offs despite losing their opening three games as they picked the momentum at the right time which helped them earn their fourth straight win in the ongoing Bangabandhu T20 Cup.

Dhaka earned the spot in the play-offs along with Gazi Group Chattogram despite losing the game Gemcon still holds the second place in the points table.

“It is not how you start that matters, but how you end in the long run that counts,” said Dhaka skipper Mushfiqur Rahim on Thursday.

“I think we showed our character and everyone was eager to play their part as well as keep their nerves in time of crisis,” he said.

Dhaka were off to a flitting start as Naim Sheikh played an quick-fire knock of 36 runs off just 17 balls that included putting Khulna on the back foot psychologically by hitting their premier all-rounder Shakib Al Hasan for four sixes in an over.

Sabbir Rahman, who came back to the playing eleven with this game after being dropped following his below-par performances in the opening two games, grabbed the opportunity with both hands making 56 runs.

Sabbir Rahman added 64 runs with Al-Amin Jr in the second wicket partnership to lay a perfect platform for Dhaka to accelerate later and eventually they ended up making 179 runs for 7 wickets.

Mashrafe Mortaza, who bowled well to pick a single wicket for 26 runs must thank Shakib for coming with the idea to change field placement at the right time and Shamim Hossain for grabbing an extraordinary catch at point. Akbar Ali played a vital role with a 14-ball 31-run knock to post a commendable the total.

“I think we batted badly. Look the wicket was good but we just could not form a partnership and as a result failed to earn success,” said Shakib.

Khulna top order again struggled for runs as they were reduced to 95 runs for 6 wickets in 14th over and as a result the asking run rate kept creeping up which eventually went beyond their reach.

Jahurul was the only batsmen who looked to be in good touch and scored 53 runs while Shamim Hossain played a cameo of 24 runs from 9 balls but it was not enough to chase down the target and eventually Khulna were all out for 159 runs in 19.3 overs.

Robi scalped 5 wickets for 27 runs to help them earn the important win ahead of their next game against Fortune Barishal on December 12.