‘Batting freely is my strength’ 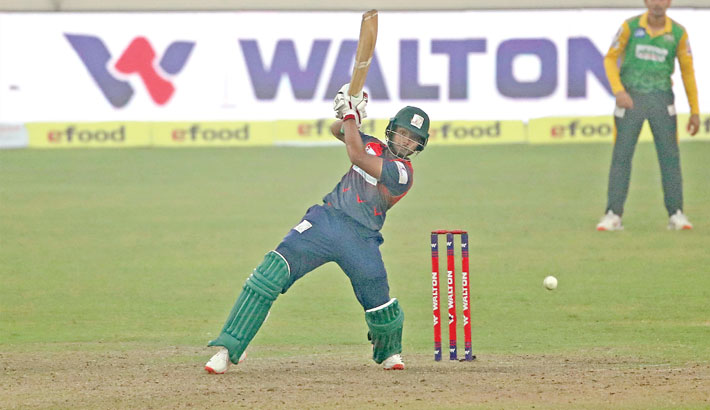 Since the emergence of Tamim Iqbal, no other opener from the port city hogged the spotlight for power-hitting before the scintillating century scored by left-handed batting prodigy Parvez Hossain Emon.

The power-cricket show which he displayed on his record-breaking knock made sure that he stamped the seal of his arrival in the nation’s cricketing landscape.

Emon said that he needs to play freely in order to get success.

Emon, a member of ICC World Cup Under-19 squad, became a sensation following his unbeaten 42-ball hundred for Fortune Barishal against Minister Rajshahi in the ongoing Bangabandhu T20 Cup.

The century which put his name in the history book as the fastest centurion of the country in the shortest also helped his side chased down a massive 220 runs in the competition. “I need to bat freely as it is my strength and I want to bat according to it,” Emon told The Daily Sun on Wednesday.

“After doing well in the opening game I had taken a lot of pressure and that prevented me from playing my natural game but in the last game I decided to play the way I know and it paid off,” he said.

Emon, who broke the record of scoring the quickest T20 century by removing Tamim Iqbal (who scored 100 rims from 50 balls against Dhaka Dynamites in Bangladesh Premier League) thanked the experienced campaigner as Tamim not only guided him while he was batting but also made sure that he does not lose his mind during the way to the dressing room after the pair was separated through a run that ended the run of Tamim, who made a 53 runs from 37 balls.

“Batting with Tamim bhai is like an inspiration because you can learn a lot watching him from the other end,” said Emon. “When he got out, he just told me to concentrate on playing my natural game and I preferred to follow his instruction and keep on playing my strokes,” he said.

Barishal needed a decent start in the big chase and they got it as Saif Hassan scored a quick fire 27 runs when Emon joined Tamim Iqbal and the duo changed the course of the match with a 117-run partnership.

But Emon was at his very best as he charged all the Rajshahi bowlers to score his maiden century in T20s.

“Look when you are chasing a big total there is no point taking pressure by looking at the scoreboard and we decided to follow the route and just concentrate on batting according to the merit of the ball,” said Emon, who was adjudged man of the match.

Fortune Barishal Manager Hasibul Hossain also echoed the sentiment which was relayed by Emon adding that he feels batting aggressively will benefit Emon.

“He was telling me the other day that he wants to bat freely and we decided to give him that opportunity,” Hasibul told reporters on Wednesday at BCB Academy premises of Sher-e-Bangla National Cricket Stadium.

“I spoke with Tamim and he assured Emon that he is given the license to bat freely and he really rose to the occasion,” he said.

“We are observing him from his Under-17 days and he is a natural stroke maker and we feel that he should bat according to his strength,” he said.