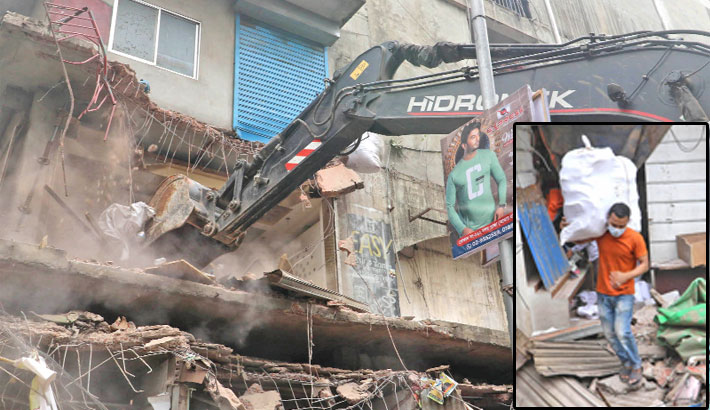 A DSCC bulldozer knocks down an illegal portion of Fulbaria Super Market-2 in the capital’s Gulistan area for a second consecutive day on Wednesday. Inset, a shop owner, apparently at a loss, has left the market with whatever goods he could take in a sack during the demolition drive. — SUN photo

A mobile court of Dhaka South City Corporation (DSCC) conducted an eviction drive at Fulbaria Super Market-2 for a second successive day and knocked down more than 210 illegal structures on Wednesday.

During the drive a large number of policemen formed a barricade around the market after a clash with businessmen on Tuesday, the first day of the drive. During the drive, traffic and pedestrian movement were stopped from BRTC counter to Fire Service and Civil Defence Station in Kazi Alauddin road area.

Md Moniruzzaman, also estate officer of DSCC, said they bulldozed more than 210 illegal structures at the market on the day.

Talking to reporters, DSCC Mayor Sheikh Fazle Noor Taposh said that they will continue drive to pull down illegal structures at the market. They will not budge on their stance whatever challenges come, he said. “When you proceed with a noble task you are sure to face opposition.”

He said that they will also conduct similar drives at other markets.

DSCC sources said that some 900 shops have been constructed over the years in violation of design and in the place of staircase, walkway and parking spaces of the market which is divided into A, B and C blocks (City Plaza, City Plaza and Nagar Plaza).

DSCC Public Relations Officer Md Abu Nasher said that they will conduct a mobile court drive today for a third straight day to tear down the rest of the illegal shops.