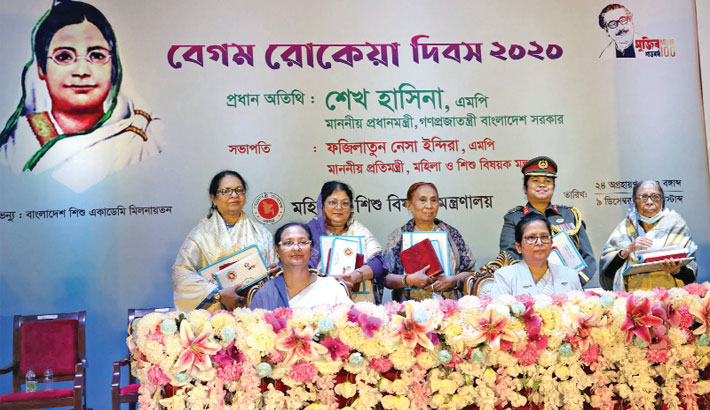 Recipients of the Begum Rokeya Award 2020 pose for a photograph with guests at a ceremony at the Bangladesh Shishu Academy auditorium in the capital on Wednesday on the occasion of Begum Rokeya Day. — SUN photo

Prime Minister Sheikh Hasina on Wednesday said the government is implementing various programmes to strengthen the position of womenfolk in the society, create women leadership and increase women education so that they can advance equally, reports UNB.

“We want women of the country to step forward equally. Half of the population of this society is women. If the womenfolk cannot prepare themselves equally ... then how this society will be built?” she said at a programme at Bangladesh Shishu Academy auditorium marking the 140th birth and 88th death anniversary of Begum Rokeya Shakhawat Hossain.

Prime Minister Hasina said that the government wanted to build Bangladesh into a developed country, but if half of the society stays behind then how will society stand on its own feet.

“The society has to step forward lamely,” she said.

Sheikh Hasina said that the government has given importance to women education and their employment. The government wanted to develop the socioeconomic condition of the country and for that, it has taken massive development programmes.

In this connection, she mentioned about the special training programmes for womenfolk so that they could stand on their own feet.

“This will be good for society and the country. The country will be free from poverty. We’re working massively keeping that target in mind,” she said.

The Prime Minister said that the government is constructing hostels across the country, even at the district and upazila levels for the working women so that they could get good accommodation.

“With this, women will be able to continue their jobs staying in secured places,” she said.

Terming women and children repression a worldwide problem, she expressed her firm stance to stop these social menaces in the country and said that the government has already taken various measurers to this end.

Sheikh Hasina said that Father of the Nation Bangabandhu Sheikh Mujibur Rahman wanted a developed and prosperous Bangladesh free from hunger and poverty.

“To materialise the dream of the Father of the Nation, everyone, including men and women, have to participate equally,” she said.

Referring to the dreams of Begum Rokeya, she said, the great women wanted to see women stand on their own feet by attaining proper education.

The Prime Minister said that Bangladesh has now reached such a position where women have stepped to a dignified position and they are now working in higher capacities in the administration, judiciary and armed forces.

“Besides, the Leader of the House, the Speaker and Leader of the Opposition in Parliament are all women in Bangladesh, which is an example in the world,” she added.

She said it was the Awami League-led government which for the first time gave posting of female officers as Secretary, Judge, DC, SP and OC.

Begum Mushtari Shafi spoke at the programme on behalf of the Padak recipients.