Most sculptures left uncared for 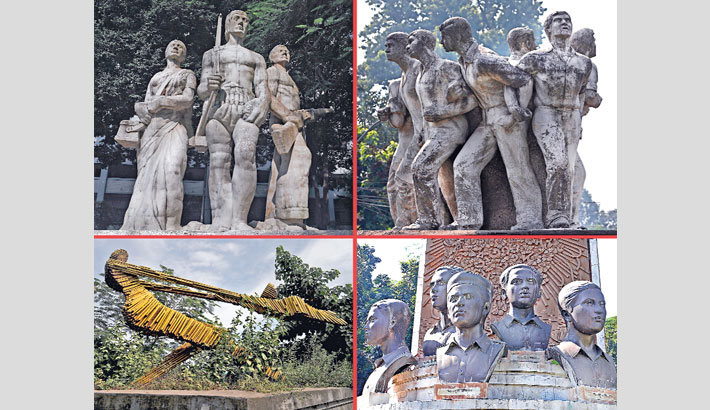 (Clockwise) Aparajeyo Bangla on DU campus, The Raju Bhashkorjo near the TSC, Moder Garob at Bangla Academy and The Joy of Mother at Hatirjheel are losing grandeur due to lack of proper maintenance. The sculptures symbolise glorious historic events of the nation but the authorities concerned turn a blind eye to the shabby state of the art works. - Kamrul Islam Ratan

Most of the sculptures built in the capital and elsewhere in the country  symbolising glorious historical events of the nation have remained uncared for due to lack of proper maintenance.

Many sculptures have lost grandeur and remained shabby, this correspondent has found during his recent visits to different sculptures in the capital.

Plaster has fallen down from many sculptures, but the authorities concerned have turned a blind eye to their shabby condition.

The majority of the sculptures represent the nation’s glorious historical events, including struggle against oppression, movement for independence, the liberation war and fight for restoring democracy.

Erected by famous sculptors in the country, Aparajeyo Bangla, Raju Bhashkorjo, Soparjito Swadhinota, Doyel Chattar, Prottasha and Moder Gorob on the  Dhaka University campus are losing grandeur due to lack of proper maintenance.

While visited Raju Bhashkorjo, it was found that the colour of the important sculptures has turned black due to lack of proper maintenance.

The fountain of Doyel Chattar doesn’t work anymore. The floating people hang clothes on the fence of the sculpture and sleep there as well.

Prottasha, a sculpture for war heroes on the DU campus, has fallen into ruin. The statue near Fazlul Haque Muslim hall was erected to glorify the spirit of the Liberation War, but unfortunately it stands in a very sorry state.

During a recent visit, it was found that the golden colour of the monument is disappearing while tiles are getting dented.

Soparjito Swadhinota, another sculpture on the TSC road island which narrates the history from 1952 to 1971, is also suffering a similar fate.

Dr Milon Memorial Sculpture at TSC intersection is a popular sitting area for both students and outsiders, which is now home to many floating people who sleep there at night.

During a visit to Bangabandhu Square Monument, it was seen that most of the metal boundary of the monument was broken as well as empty chips packets, ice-cream covers, soft drink cans, disposable plastic cups, banana peels and paper waste lay strewn all around the floor.

The famous Shapla structure in Motijheel gathered dust and looked discoloured. The Joy of Mother Statue at Hatirjheel was also in a shabby condition.

When contacted, Mukul Kumar Barai, associate professor of the Department of Sculpture at Dhaka University, told the Daily Sun, “The authorities and architects of the sculptures on the campus have to come ahead in that case because these cannot be renovated without permission from Dhaka University.”

“People need to be more aware so that the beauty and sanctity of the sculptures are neither damaged nor lost,” he suggested.