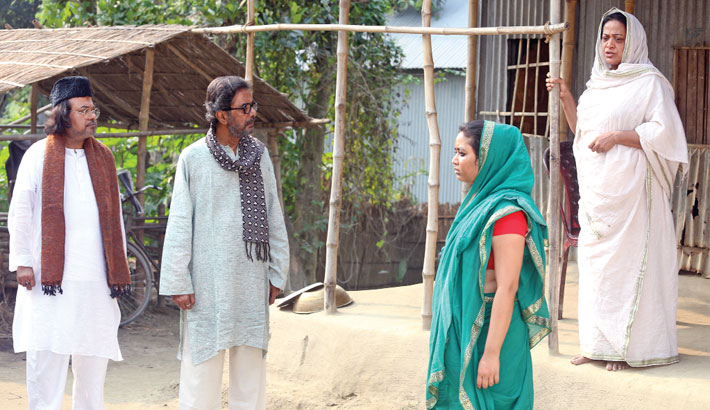 Aruna Biswas is one of the popular actresses of both the silver and small screen of the country. She has won the heart of millions by her fabulous acting style. Alongside acting, she also directs film occasionally.

Recently, the actress has directed a short film titled ‘Thikana Bottrish’. The shooting of the short film has been completed at a location in the capital on Friday and Saturday. Aruna Biswas herself has also written the story of the film.

The story of the short film is based on the Liberation War of Bangladesh.  The cast of the film includes, Aruna Biswas, Jayanta Chattopadhyay, Shahidul Alam Sachchu, M A Salam, Mukul Siraj and Ashna Habib Bhabna.

About the film, Aruna said, “I’ve also written the story of the short film.  It is a Liberation War base telefilm.  The film has depicted the story of women who were raped or abused by the Pakistani army during Liberation War and generosity of Father of the Nation Bangabandhu Sheikh Mujibur Rahman to them after the Liberation War. I’ve tried to portray the story properly. I am grateful to those who have kept trust in me to do this project.”

“Acting is my profession and my affection too. Sometimes, I get several concepts in my mind and feel to bring it on screen. As a director, I’ve always tried to do constructive work”, she added.

The film will be aired on almost all the television channels of the country soon, said Aruna Biswas. Aruna Biswas is a stage and film actress of the country. She is also a television drama director. She debuted in film industry in 1986. Since then, the actress has acted in over 100 films.

Aruna Biswas, also a member of the Bangladesh Film Censor Board, directed her first TV serial ‘Onnorokomer Lojja’ for Channel I. Then she completed ‘Dolonchampa’ by Kazi Nazrul Islam, ‘Boner Papiya and Dristhtidaan’ by Rabindranath Tagore, ‘Shure Eka Chobi ‘and ‘Boro Didi’ by Sarat Chandra Chattopadhyay.