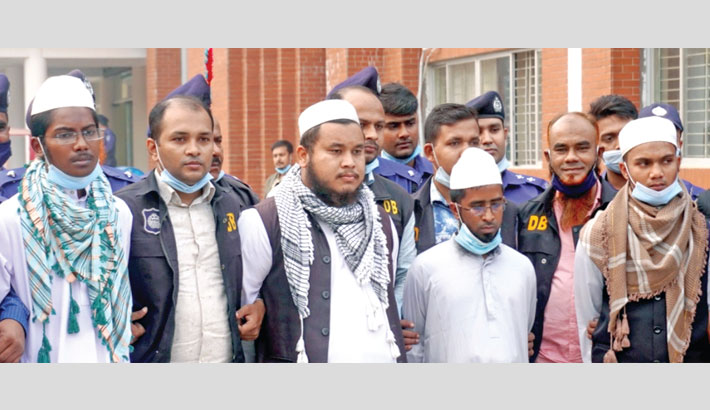 Four madrasa students have been arrested over the vandalism of an under-construction sculpture of Father of the Nation Bangabandhu Sheikh Mujibur Rahman in Kushtia with protests rocking the country over the incident.

Police say two of the arrestees were the perpetrators of the heinous act who have been identified after scrutinising the CCTV footage.

In the surveillance video, the two madrasa students, clad in panjabis and caps, were seen walking towards the under-construction sculpture and climbing up a ladder around 2am on Saturday before smashing it with hammers.

Home Minister Asaduzzaman Khan made the disclosure of the arrest on Sunday while talking to reporters at his office. "They (arrestees) committed this act coming out of Ibn Masud Madrasa,” he said.

Superintendent of Police of Kushtia SM Tanvir Arafat said they identified the miscreants involved in the incident with the help of the CCTV footage.

Police first arrested Abu Bakar and Nahid and later picked up Alamin and Yusuf based on information gleaned from the former duo.

Miscreants vandalised portions of the face and hands of the under-construction sculpture of Bangabandhu in the district town of Kushtia in the early hours of Saturday. 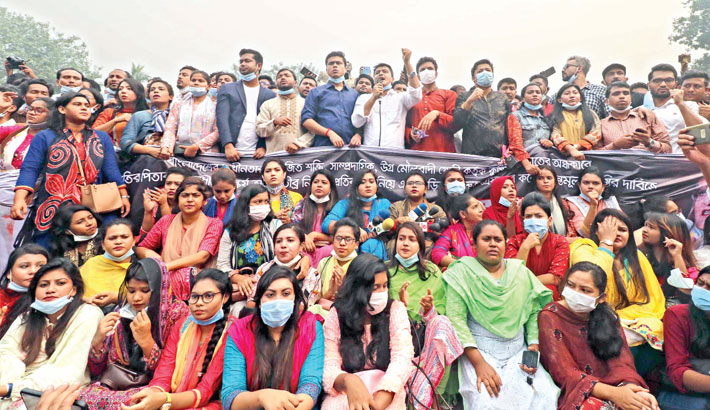 The incident came at a time when country's Islamist parties, particularly Hefajat-e-Islam, are opposing the installation of Bangabandhu's sculpture.

Kushtia municipality decided to construct three sculptures of Bangabandhu at the Five Road intersection of the district town with its own fund on the occasion of his birth centenary.

Meanwhile, people from all walks of life, including ruling Awami League and its front organisations, took to the streets in the capital and elsewhere across the country on Sunday in protest against the vandalism of Bangabandhu’s sculpture.

They held rallies and processions throughout the country demanding arrest and exemplary punishment of the culprits.

Demanding arrest and exemplary punishment of those involved in the incident, hundreds of BCL leaders and activists gathered at the Teacher-Student Centre (TSC) and shouted slogans.

Describing the attackers as Pakistani ghosts, the BCL chief urged his party men to break their hands and legs before handing them over to police wherever they find them desecrating Bangabandhu’s sculpture.

Leaders and activists of Jubo League also brought out separate processions and held rallies at different parts of the country in protest against the sculpture vandalism.

“Kushtia’s incident is nothing but a clear manifestation of the provocative statements made by country's political leaders and religion sellers in recent times," reads a press release signed by acting Duta President Prof Lutfar Rahman and General Secretary Prof Nizamul Hoque Bhuiyan.

"Insulting Bangabandhu Sheikh Mujibur Rahman at dark night in the month of great victory is absolutely an act of anti-liberation forces who want to make Bangladesh’s independence and sovereignty dysfunctional and the country a backward state," it said.

It is not possible for a loyal citizen to insult the great leader who gave people an independent country, a national identity, sovereignty and self-respect through his indescribable sacrifices and contributions, the release added.

Meanwhile, teachers of Chittagong University (CU) observed a sit-in programme at the ‘Bangabandhu Chattar’ on the campus protesting the vandalism of the sculpture.

The agitating teachers observed that the incident is not only an attack on the sculpture of Father of the Nation but also on the existence of Bangladesh.

Communist Party of Bangladesh also protested the incident, expressing grave concerns over it.