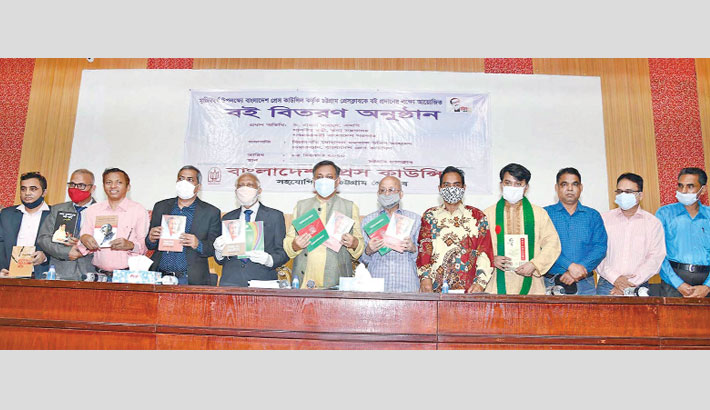 Information Minister Dr Hasan Mahmud along with others holds the copies of books on life and works of Bangabandhu at a programme marking the distribution of books at Bangabandhu Hall of Chattogram Press Club on Saturday. — SUN PHOTO

CHATTOGRAM: Information Minister Dr Hasan Mahmud has warned that an insult to Bangabandhu over any issue will not be tolerated.

He came up with the warning while addressing as the chief guest at a distribution programme of the books on ‘Bangabandhu, Liberation War and Journalism’ at Bangabandhu Hall of Chattogram Press Club on Saturday.

Bangladesh Press Council distributed the books to Chattogram Press Club at Bangabandhu Hall of the club marking the ‘Mujib Barsho’ on Saturday.

Addressing the programme, the minister said they cannot celebrate ‘Mujib Barsho’ properly because of the coronavirus pandemic.

“But a vested quarter is creating controversy on different issues at the end of the Mujib Barsho in a bid to create instability in society,” he observed.

“We will have to be careful in this regard and insult of Bangabandhu over any issue will not be tolerated,” he warned.  The minister called upon the journalists to speak against those who want to insult Bangabandhu and create chaos in society.

“Journalists show the way to the people. They had praiseworthy roles for realising rights and independence of the country,” he recalled.

"Writing of journalists for independence under the leadership of Bangabandhu and news of newspapers played important roles in shaping people's minds for independence,” said the minister. Time has come to write against those who want to hold the society back and patronise them, said Dr Hasan, also joint general secretary of the ruling Awami League.

Highlighting background of establishment of the Press Council, the Information Minister said, “Father of the Nation Bangabandhu Sheikh Mujibur Rahman established the Bangladesh Press Council in 1974 with the aim of resolving the conflict between readers and the media.

“The Press Council law is now on the stage of amendment. We are trying to place it in the next session of the parliament,” said the minister.