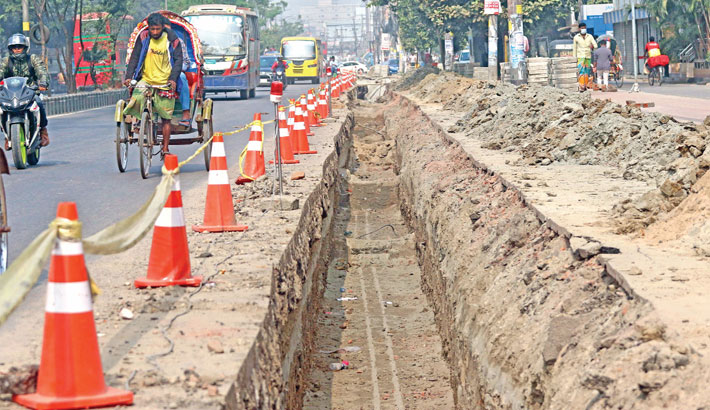 Dhaka Electric Supply Company (Desco) has dug a channel along a busy road in the capital for laying high-voltage underground power cable, hampering traffic on the road. The photo was taken from Natunbazar area on Saturday. —MD NASIR UDDIN

Indiscriminate digging of roads by different utility service provides is going on at different parts of the capital, including Natunbazar and Kuril Biswa Road, for repair and installation works, inflicting sufferings on the city dwellers.

Long trenches are being dug up in those areas, narrowing the roads and leading to traffic gridlock. Besides, there were reports of vehicles falling into the trenches.

Soon after an agency completes digging a certain road, another agency starts digging it, adding to people’s sufferings, they said.

Dhaka Electric Supply Company (DESCO) Ltd started digging trenches on both sides of busy Bashundhara-Natunbazar road around three weeks ago for installation of electric fibre line, narrowing down the both carriageways.

Traffic congestion is created on both sides of the road from morning to night every day. Besides, there were accidents caused due to the digging.

A goods-carrying truck fell into the trench at Baridhara near Coca-Cola on Wednesday.

Paying a spot visit on that night, it was found that the truck was lying in the trench upside down.

Mohammad Azhar, a motor parts trader of the area, said the movement of vehicles is seriously being disrupted due to the fresh digging of the busy road.

He said traffic jam is created on both carriageways every day as those have become narrower due to the digging.

Contacted, DESCO Managing Director Md Kausar Ameer Ali said they were installing electric fibre line beneath roads in some areas, including Natunbazar-Bashundhara one.

Admitting that the vehicular movement is partly being disrupted due to the installation work, he said the work will end by this month.

Such repair and installation works by DESCO and other agencies, including Dhaka Water Supply and Sewerage Authority, by digging roads is going on also in Bijoy Sharani, Kamalapur, Motijheel, Kakrail, Badda and Kuril Biswa Road areas.

Lanes and by-lanes are also being dug up in those areas, causing sufferings to commuters and passersby.

Especially, office-goers faced untold sufferings while going to and returning from their destinations amid severe traffic jam triggered by the fresh road digging.

“The digging of roads is going on unabated without any plan. When one agency ends the digging, another one starts digging, adding woes to the city dwellers,” said a frustrated Debashis, a resident of Narda.

He also said many roads were left with big holes for long after the repair and installation works end, which mounts commuters’ sufferings.

Meanwhile, city corporations and other utility service providers blame each other for the sufferings people have to undergo due to road digging throughout the year.